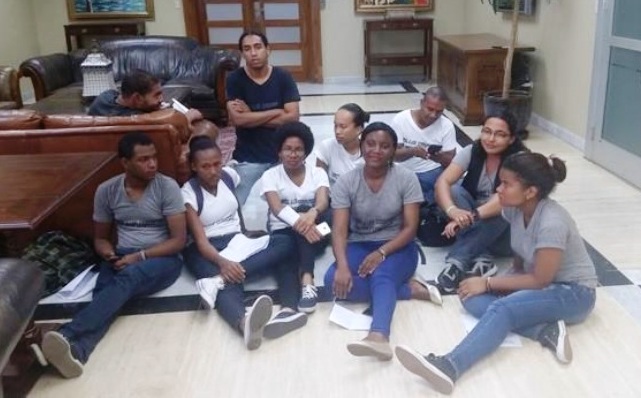 Santo Domingo.- A group of students stage a sit-in on the fourth floor of the Office of the Prosecutor Tues. afternoon, to demand indictments for Odebrecht’s admitted US$92.0 million bribe of Dominican officials.

Nine young men and women who claim to be independent students, took advantage of an activity on the second floor and went up to the fourth and entered the Justice Ministry’s reception.

They said they decided to occupy the Office o the Prosecutor because despite that the Brazilian company’s bribe scandal was uncovered five months ago, there’s still no response.

“We occupy the Justice Ministry because we know that the prosecutor evades, hides, lies and maneuvers to leave things to time and create conditions for the case to go unpunished,” said one of the students.

They say they decided to protest because they’re “absolutely convinced that the political power seeks to downplay the case by simply charging a small group of front men and two or three suitably selected officials.”

“The people are on the street and will not stop until they reach the noblest and most important social goal of justice in the Odebrecht case.”

The security guards meanwhile look for ways to get them out of the area, but the group is reluctant to leave.