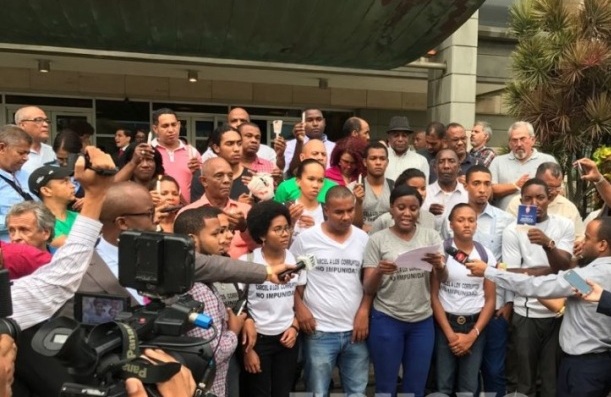 Santo Domingo.- The Justice Ministry on Wed. questioned the methods used by the nine youngsters who stage a sit-in at its offices yesterday to protest corruption, getting past security by posing as university students seeking information.

“Using this motive that turned out to be false, the visitors arrived at the fourth floor, surprising security and unauthorized penetrated the reception that leads to the office of the Justice Minister,” it said in a statement.

The youngsters, who during six hours demanded a thorough investigation of the Odebrecht US$92.0 million bribe scandal, were doused with pepper spray, forcing 9-1-1 first responders to provide aid.

“The young people were given every facility to explain to the press the reasons that led them to break into an area of ​​limited access, such as the office of the attorney general and deputy attorneys general, as well as other sensitive dependencies that include the institution’s litigation department,” the Justice Ministry said.

It added that despite their occupation was of a public building, “it has restricted areas and rules of conduct that must be complied with by all users and employees, without exception.”