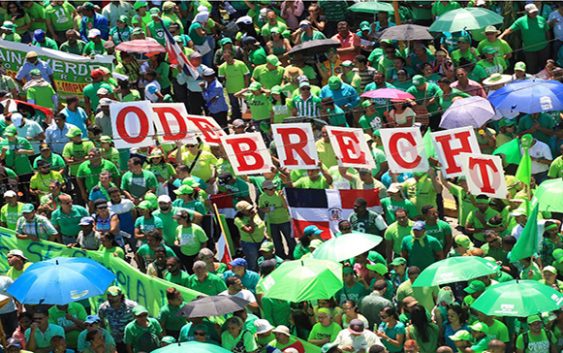 Santo Domingo.- The grassroots movement Marcha Verde (Green March) in the town of Navarrete (northwest) on Sunday demanded the suspension of the Brazilian company Odebrecht in the construction of the US$2.1 billion Punta Catalina power plant, and for president Danilo Medina and his entire Cabinet to step down.

The demand to suspend Odebrecht is in the document read at the end of the march, attended by hundreds of people who walked several streets of the sprawling capital district of Cristo Rey

They also demanded an investigation into financing of Medina’s electoral campaigns and the coal-fired Punta Catalina power plant.

Reading the document, Angelica Rijo said the Justice Ministry only selected some of the accused with Odebrecht’s admitted bribes of US$92.0 million.

Hundreds of people walked through several streets in the town on Sunday to demand an end to impunity and government corruption.

The protesters in green garb waved banners and shouted their demands. At the end of the march its organizers read the “Navarrete Manifesto,” which, among other things, demanded the resignation of Medina and his entire cabinet, and the designation of a provisional one.

Local Green spokesman Pablo Ferreira read the document, calling for a constitutional reform with the popular vote, as the pillars to improve the people’s economic, political and social life.

The march started before 10am, as people began to gather at busy intersections in Cristo Rey with green banners in hand, as onlookers expressed support on sidewalks and balconies, flashing and waving green objects.