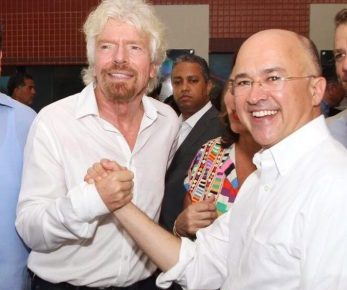 Santo Domingo.- The Environment Ministry on Wed. announced a ban on the capture, marketing, export and import of all varieties of sharks, rays, parrotfish and sea urchins in Dominican Republic’s territorial waters.

The Resolution was announced in the presence of the tycoon of Virgin enterprises, philanthropist and environmentalist Richard Branson, who was visiting the country.

Branson said he works to stop the capture of sharks and other species in the Caribbean region to turn the oceans into environmentally beautiful areas.

For his part, Environment minister Francisco Dominguez said he’s aware that a pure and simple ban doesn’t solve the problem. “Perhaps it will be an even greater challenge to enforce it.”

The official said Environment will coordinate the effort with agencies such as the fishing oversight commission ( CODOPESCA), the Dominican Navy and the National Environmental Protection Service (SENPA). “But more than anything, it’s the people who must support us by not consuming these species in a ban and denouncing those businesses that don’t comply with the measure.”