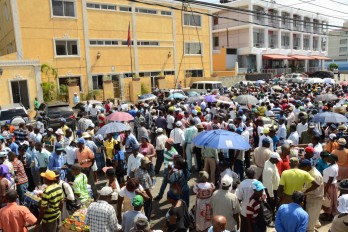 Santo Domingo.- Interior and Police minister Carlos Amarante said Sunday that Haiti’s Government should collaborate more with its nationals in the Dominican Republic who want to legalize their immigration status, through the National Plan to Regularize Foreigners.

He said that the new term for immigrants to regularize their conditions starts Aug. 26t.

“Let’s not kid ourselves, the regularization plan receives Haitian nationals, but what happens is that do not regularize one’s immigration status in any nation if you don’t have the minimum documents…birth certificate, civil identification and passport , without that you cannot advance and unfortunately our Haitian neighbors lack these documents.”

The official reiterated that Haiti authorities should help their nationals in the Dominican Republic to avert repatriation. “Once the deadline has expired, if you didn’t qualify, then you will be repatriated.”

Amarante said Immigration works to allow foreigner who became regularized to renew or change their immigration status according to the law, adding that the Foreign Ministry works with Haitian counterparts, “to try to streamline that process.”