Country’s anti-drug push based only on arrests, confiscations 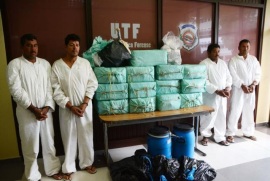 Santo Domingo.-  The NGO Casa Abierta (open house) on Wed. affirmed that the country continues in the past in the field of drugs, and in its view that positive results can never be evidenced, since there’s only talk of arrests and confiscations .

Casa Abierta said the country should worry more about decriminalizing consumption. “It’s time to act with intelligence, leaving behind the dogmas of repressive policies. It is time to weigh the anchors of the past. ”

The entity stated regret with the Constitutional Court ruling which ratified “the aberration” of article 7 of law 50 -88, concluding that it doesn’t violate the rights, to brand as trafficker people with simple possession of “LSD or any other hallucinogenic substance, as well as opium and its derivatives.”

Recently the US government, like every year, again included the Dominican Republic among nations Washington considers “major producers or platforms for drug trafficking.”

This is, according to the US assessment, has been the country’s weak efforts to control the illegal drug business, and despite that Dominican Republic’s anti-drug policies are based on repression.