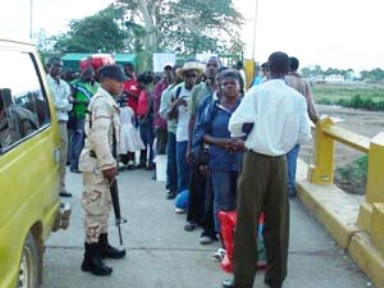 Santo Domingo.-. Former Immigration director, José Ricardo Taveras, on Sun. denounced that NGOs increasingly incite Haitian citizens to stage activities on their plight, which in his view create the conditions for a forthcoming visit of delegates from the Commission Inter-American Commission on Human Rights (CIDH), of the Organization of American States (OAS).

He said the activities “are part of the beginning of a new international attack based on the immoral campaign of alleged denationalization of Dominican citizens of Haitian descent.”

Taveras said the visit by those organizations is backed by government agencies and aims to pressure president Danilo Medina and expand the illegal effects of the country’s foreigner regularization program, which “have served for the administrative dismantling of the Constitution, Sentence 168-13 and the General Immigration Law No. 285-13 and its regulations.”

The also general secretary of the nationalist minority party National Progressive Force (FNP) said he has learned that Immigration is issuing temporary residences to the beneficiaries of the program, “a category that is granted to all those who will be issued definitive residence.”

“The government, shamefully, not only violates the law by granting that category to foreigners whose migratory profile defined by law is seasonal workers, but it is directed to the legal consolidation of a national ethnic minority, since within five years, probably 10% of the national population will be Haitians naturalized as Dominicans and their descendants, who, being children of legal residents, will be Dominicans by birthright.”