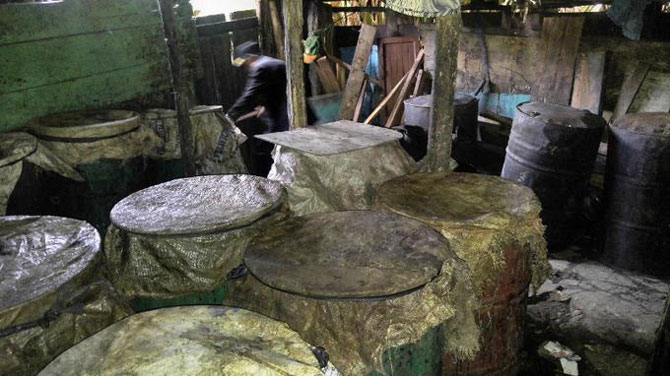 Santo Domingo.- Despite the authorities emitting an epidemiological alert yesterday warning the public against consumption of illegally home-brewed clerén, the drink that has claimed at least 12 lives in recent days is selling “like hot cakes” in colmados and street corners around the country, according to media reports.

A bottle sells for just RD$30 or RD$40. Clerén, triculí or klerén is a popular drink in Haiti and its popularity is increasing in the Dominican Republic.

However, even moderate consumption can be harmful or fatal, especially when adulterated with highly toxic substances like methanol, which the Public Health authorities say was the cause of the recent spate of deaths.

Clerén is brewed from sugar cane.

The outbreak of poisonings started in Pedro Santana in the southwestern province of Independencia, affecting 33 people of whom 12 died. Héctor Quezada, vice minister of Community Health, said that the figure did not include the death toll in Haiti.

“The origin of the toxic substance was near Pedro Santana, a place called Los Cacaos in Haiti, where there is a large-scale brewery of this drink which is brought across the border and distributed in communities in this country,” he said.

Epidemiological director Raquel Pimentel said that cases had also been confirmed in the border provinces of Dajabón and Elías Piña, as well as in Santiago and the National District. She said that the authorities remain vigilant.