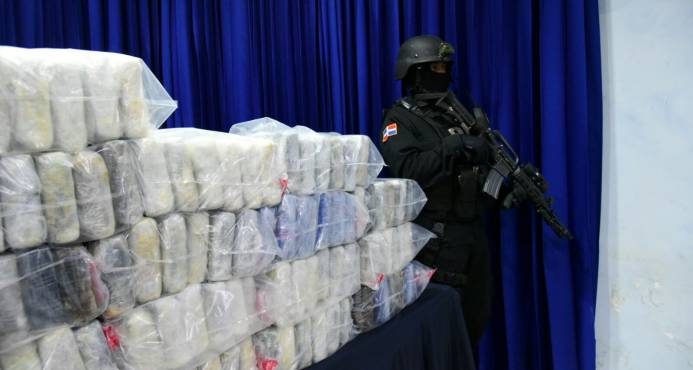 Santo Domingo.- National Drug Control Agency (DNCD) spokesman Carlos Devers informed that with the support of the Dominican Armada (Navy) in an operation coordinated by the Judicial Branch, 850 packages containing a substance believed to be cocaine were confiscated on the coast of La Romana province.

He said that the haul was found when agents intercepted a fast launch during a major operation near Catalina Island. Four people on board, three Venezuelans and one Dominican, are suspected of trying to import the drugs into the Dominican Republic.

In December alone, the DNCD seized more than 2,000 kg of cocaine, a significant increase on last year.

The DNCD spokesman said that they are seeking several other members of this international drug-trafficking ring.

Devers added that in the past few months, the DNCD with support from the Armed Forces, the Police, the Public Prosecution service and other security and intelligence agencies, have dealt heavy blows to the international drugs trade by preventing several large drug consignments from being brought into the country.

The 850 packets are being sent to the National Institute of Forensic Sciences for analysis.