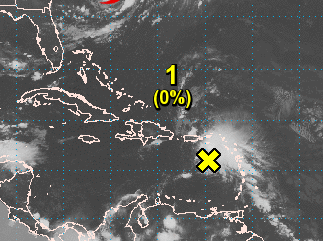 Santo Domingo.- Tropical storm Beryl dissipated Sun. just before reaching the Lesser Antilles, but continues with maximum sustained winds of 75 kilometers per hour, according to the National Hurricane Center (NHC).

Meanwhile Emergency Operations Center (COE) director Juan Manuel Méndez, said that Beryl is expected to continue weakening and that for today it is an active tropical wave moving over the Caribbean.

In a National Palace press conference Méndez said Beryl’s remnants will be affecting the Dominican Republic as of Monday afternoon, with cloudy skies with strong to moderate showers, and electrical storms expected in the southeast provinces.

The forecast prompted the COE to issued flash flooding alert for 14 provinces.