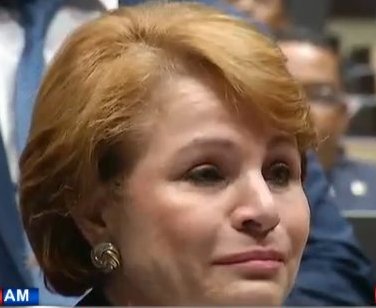 Santo Domingo.- Weeping and drying tears, ruling PLD party deputy Lucia Medina defended her “ethics and morals” in front of her lower Chamber colleagues, in the heels of a scandal over Education Ministry backpacks featuring her name and her foundation’s logo.

Medina said that she asked the supplier company Ston Blue to urgently make 3,000 backpacks for her to deliver them to students in San Juan province (west).

“What have I got to gain by putting the name of a foundation that I represent on an Education Ministry backpack,?” the lawmaker asked.

The response was quick because as it turns out, the manager of Ston Blue is Felipe Isa, who’s the head of a group of textile manufacturers who provided financial support for the 2016 electoral campaign of president Danilo Medina, who happens to be Lucia (Yomary) Medina’s brother.