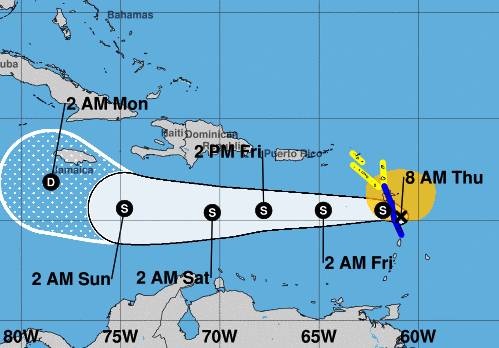 Santo Domingo.-  The Emergency Operations Center (COE) on  Wed. activated the Contingency Plan for Hydrological Events, to respond to the effects of Tropical Storm Isaac over the country.

Present in a press conference at COE headquarters were the heads of the country’s relief agencies, where National Weather Office (Onamet) director Gloria Ceballos warned that the storm’s cloud field would reach Dominican territory as early as Friday.

Ceballos said there will be downpours, thunderstorms and gusts of wind in the east, southeast and northeast of the country. “The waves will begin to deteriorate gradually along the Caribbean coast, with some effects to the Atlantic coast.”

She said Isaac’s center is located around 480 kilometers east of the Lesser Antilles, with maximum sustained winds of 95 kph, moving west at 31 kph, adding that it could rain as much as 100 millimeters at some points.