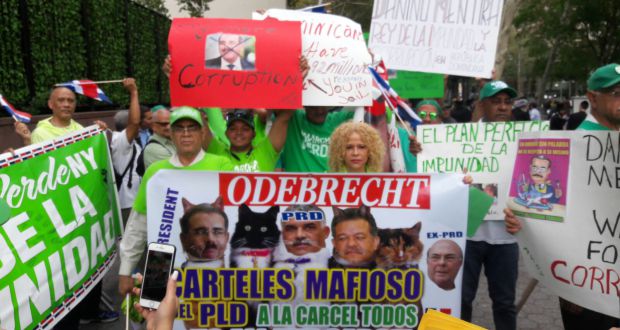 Protest against DR politicos in NYC. Photo by primeraplanany.com

New York.- Several protests and pickets hounded president Danilo Medina near the UN, at Upper Manhattan streets and at the swank Eastside hotel The Langham, which lodges the president and his entourage since Mon..

File.- Tense expectation spreads among the Dominican-dominated Upper Manhattan from the visit by former president Leonel Fernandez today Wednesday, to the area which he hasn’t visited for four years.

The former president will host a fund-raising, US$500- per- plate dinner at “Cocina Taller” restaurant on 203rd St. with 10th Av. starting 7pm, organized by businessman Darío Oleaga, a former official of the Dominican mission to the UN.

“Hey, Leonel is coming to a dinner party here, let’s go over there to see that ruckus;”

“I heard they are going to picket him” so that Danilo (president Medina) can beat Leonel.”

“You remember the picket that they did some time ago in the restaurant owned by Felix Cabrera.”

The last public act which Fernandez attended in Upper Manhattan was in Sept. 2014, a rally at the then South Beach restaurant, located on St. Nicholas Av. with 180th St.

On Mon., the hecklers were busy chasing Foreign minister Miguel Vargas, forcing him and his sizable entourage to scurry into a restaurant in Midtown Manhattan.