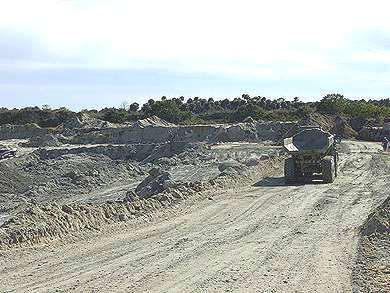 Santo Domingo.- The Dominican Academy of Sciences on Tues. expressed its concern about what it calls aggressive mining being developed in the country, without an adequate legal framework and without measuring the scope of environmental impacts.

“In the Natural Sciences Commission and this group of men and women of science, we are aware that mining is a legitimate source of wealth, of which the country should not do without, if its development is part of a National Territorial Plan, with an up-to-date and environmentally responsible legal framework,” the document states.

It says that it should be the authorities’ interest and responsibility to develop mining that measures the scope of the unavoidable environmental impacts that it implies.

The Academy says that the Energy and Mines minister Antonio Isa talks about the development of the “Extractive Industry, instead of mining and that the basic orientation would be the export, as if it were inexhaustible goods, which will always be there and whose exploitation must be carried out in function of its benefits.”

“In the long run, every warehouse goes empty, if it’s only extracted and nothing is put back. Sustainability is achieved with the method and not in the extraction at all costs,” the Academy says in its October bulletin.