Dominicans beware of US total ban on cockfights 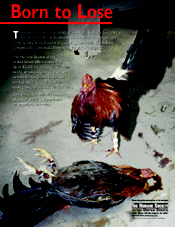 New York.- The US Congress on Wed. approved a bill to completely ban cockfighting in US territories, including Puerto Rico and the Virgin Islands, ending a practice dating to the colonial era and involves millions of dollars each year.

The law will take effect in a year.

It’s currently illegal in 48 States, including New York to attend a cockfight, which is a felony that carries a possible sentence of up to one year in jail and fines of up to US$1,000.

In recent years several Dominicans have been arrested for raising fighting cocks in New York, a situation that in the US is considered a cruel and abusive practice that tortures animals.

The last arrest of Dominicans in the city for raising fighting cocks was last year at J & J Iron Works in Fordham, the Bronx, where police seized around 100 birds.

Cockfighting in the Dominican Republic is a tradition, a custom and legal game of chance, although increasingly rejected by society.