Police assure that robberies have been reduced 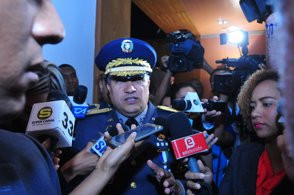 The director of the National Police, Major General Ney Aldrin Bautista asked for prudence in the remainder of the festive period.

Director of the National Police, Major General Ney Aldrin Bautista Almonte, said that more than 456,000 people were mobilized during the Christmas festivities, and because of the reinforcements of agents in the commercial areas where the money moves, few cases have occurred.

“Today we are doing the same. We have the Telemicro party that thousands of people attend, Spain Avenue, Venezuela, San Cristóbal party and other businesses in Villa Juana, where we are going to preserve tranquility during this end of the year, “said the police director.

“We ask for prudence from all parties; that people take a second when they are reaching the limit and stop so that tomorrow the discussion will be about the number of people we saved in these festivities,” said Major General Bautista Almonte.

It was December 3rd of last year that the director of the National Police Major General Ney Aldrin Bautista Almonte began the “Operation of Security Tranquil Christmas 2018-2019,” in which there would be 26,238 men and women from the corps of order and more than 3,300 members of the Ministry of Defense.