Víctor Gómez Bergés: “we can not absorb the Haitian people” 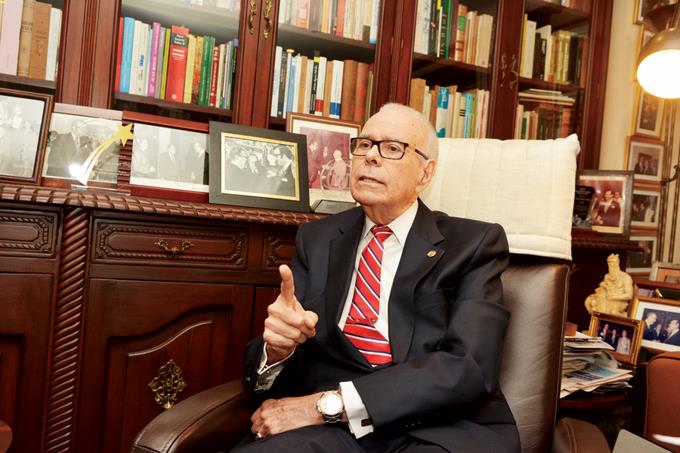 Former judge. Víctor Gómez Bergés, former judge of the Constitutional Court, describes the great differences that exist between the Haitian people and the Dominican people, which in his opinion prevents any attempt to merge the two nations.

After 53 years of a career in public service, the last seven were as judges of the Constitutional Court, Víctor Gómez Bergés will dedicate himself to writing, to continue utilizing the skills, at the age of 78, of a job that he remains passionate about.

The ex-judge of the Constitutional Court granted an interview to LISTÍN DIARIO, in the personal library that he has in his residence, sat surrounded by books and pictures, with photos of different public positions he has held in the public administration.

In a calm and serene voice, Gómez Bergés commented that acting Constitutional Judge did not allow him much time to write, although he did not stop writing either, as he noted he did manage to write two books.

When concluding his work as Constitutional Magistrate, two weeks ago, Gómez Bergés has already defined what he intends to write, “My next book will be called: the Dominican Republic and Haiti.”

This new production will mainly focus on his experiences as Chancellor of the Republic Dominican, a position he held from 1972-1975 when he was 32-years-old.

Immediately, he goes on to explain that he will voice his position on the migratory situation of the Dominican Republic vis-à-vis the neighboring nation, and on verdict 168/13, dictated by the Constitutional Court in September 2013, which establishes the conditions for granting the Dominican nationality, determining that it does not correspond to the children of illegal aliens.

Verdict 168/13, precisely, put a “stop” to the anarchy that previously reigned in the Dominican nation, regarding the issue of Haitians.

Gómez Bergés further pointed out that the Dominican Republic and Haiti are two diametrically opposed peoples, with different origins, which he does not perceive in the other Latin American countries.

“There are already more Haitians than Dominicans, they have an impressive capacity for reproduction. In a much smaller territory than ours, they have devastated their country. There are no trees, the rivers have practically been destroyed,” he said.

He believes that this situation has to be made known to the international community, which is why he is so determined to translate his opinion into works describing the status, impact, and effect of Haitian immigrants in the Dominican Republic.

He evaluated the decision of the Dominican government not to sign the Global Compact for Secure, Ordered and Regular Migration, sponsored by the United Nations (UN) as intelligent and responsible.

The former Constitutional Magistrate believes that the international community must be made aware, above all, that the union of Haiti and the Dominican Republic is impossible.

He warned that the country can not accept massive immigration of Haitians, because the two peoples do not speak the same language, nor do they have the same religion or culture.

“That’s why I’m going to write my experiences of the almost four years I had in the Foreign Ministry,” he said.

He indicated that the only island in the Latin American continent that has two republics is that of Santo Domingo.

“The Dominican Republic has a sword of Damocles on its head, it is a population of an origin, a culture, a tradition, religions, totally divorced from the Republic of Haiti,” he said.

Gómez Bergés defines himself as passionate about his country. He has published 13 works, including: “Only the truth,” in which he gathers the events in the 1975 elections of the Organization of American States (OAS), in which he was nominated, without success, to preside over that organization, when he was 35 years old.

Renewal of the Court

Gómez Bergés left the Constitutional Court because he’d reached the retirement age limit of 75 years, and also because he exhausted the six-year term for which he was elected, as well as three other magistrates.

“The renewal of the organizations enriches them,” says the ex-judge of the TC when questioned about the gradual renewal provided by the Constitution, of the 13 first magistrates of the High Court

Consider that change is favorable. Understand that you can not replace the 13 judges in one fell swoop so that another 13 new ones come. He says that with the partial renovation an interaction is achieved that helps a lot.

He holds a similar position with regard to the retirement age limit, as has been the case. He believes that it was a reasonable measure to adopt the establishment of an age limit for replacement because he understands that continuity is not good.

It values the interaction with the other magistrates as harmonious.

“Most of us did not know each other, we enjoyed a very rare and cooperative human action, there has never been any conflict between the 13 judges, we had a unique harmony,” he said.

He highlighted the conciliation capacity of the president of the Court, Dr. Milton Ray Guevara.

“He is a full-blooded diplomat, whenever there could be some difference, analyzed, discussed and postponed for the next day, he would find the harmony,” he related. “He said that whoever did not agree with a decision, was issuing a dissident vote.”

The discarding of judgment 168/13 has generated some problematic situations among the judges.

Gómez Bergés recalled that there were dissenting votes from two magistrates, but indicated that it is a right that benefits them. They voted against the judges Ana Isabel Bonilla Hernández and Katia Miguelina Jiménez Martínez.

The former public servant defines his experience of seven years in the Constitutional Court as very enriching.

His knowledge in constitutional matters, he notes, comes from the time he taught at the Pontificia Universidad Católica Madre y Maestra, in Santo Domingo, and in Santiago.

He says that for him, the Constitution has been of paramount importance in the Dominican Republic. He argued that in the reforms carried out between 1961 and 1966 he was involved in one way or another.

“For me, the Constitution has been not only the fundamental document of the Republic but also established the kinds of standards that we Dominicans were not accustomed to observing and respecting, “he said.

He said that in its seven years of existence, the Constitutional Court has been strengthened in such a way that all the Dominicans know what to expect.

His last days in the Constitutional Court

Gómez Bergés, along with the other three judges who retired, worked until December 10, the day on which the National Council of the Magistracy (CNM) chose the four new magistrates, participating in the session to decide the cases of those who participated in the deliberations, whose sentences they will sign, even though they are no longer in the Court.

“The sentences in which we participate have to be signed by us,” he said. He does not know how many files he has left unsigned. All will be dated December 10, even if they are published later.

Advice for the new magistrates

Expressing that the team of constitutional assistants of the judges is very valuable and that an important quota will be maintained in the TC which means it will help the newly admitted because it incorporates the past precedents.

LABOR OF THE CONSTITUTIONAL COURT

He says that the Constitutional Court has fulfilled its responsibility when being questioned about the delay in some decisions.

“What happens is that there are so many cases that have reached the Constitutional Court, which can not be rendered at the same time,” he emphasizes. He specified that they had agendas of 40 and up to 60 files, in one day, of the 13 offices.

He maintains that the Tribunal has been very strong and everyone has respected it, attributing that entrenchment to a clear conscience and to the attitude of responsibility that the constitutional body has had.

Gómez Bergés assures that he has not taken into account the particular interests or of any State agency, but rather, adjusted to what the Constitution mandates.

He trusts that the Constitutional Court will continue to do so because he observes that there is a lot of constitutional awareness in the country. He considers that the legal class has also become aware of the role of the High Court. He stressed that the TC has had an international reception.