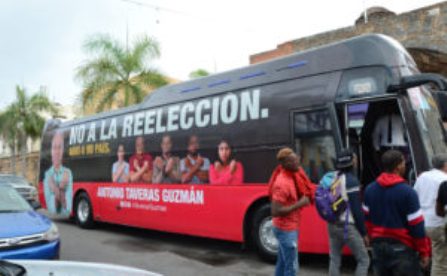 The first stop of the “No to Reelection” campaign bus will be northern Espaillat province, where Taveras’ supporters will honor the tradition of work and honesty of his parents’ origins in the heroic town of Moca.

He said reelection means more debt, alienating foreign investment and continued corruption, crime and insecurity. “The people have awakened and will mobilize in the streets of the whole country against the current regime of corruption and impunity.”

“We are millions who think and feel the same. We are ready to tell Danilo Medina and all his partners No to reelection, because reelection means the continuity of robbery, crime, insecurity and fear of walking freely through our streets and public spaces,” he said.

“We are fed up with the corrupt politicians who tell us lies, while the citizens work,” said the former president of the Santo Domingo and Herrera Industries Association, who launched his campaign in front of the Altar de la Patria, where National Independence was declared on February 27, 1844.