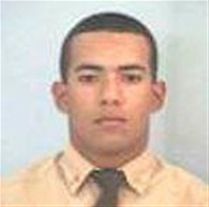 According to prosecutors, the accused had also been linked to the murder of 1st Lt. Guillermo Antonio Tejeda Krawinkel , who was assigned to the National Drug Control Directorate (DNCD).

The ruling comes after two years and 17 adjournments which according to the prosecution sought thee expiration of the statute of limitation.

The murder of Tejeda Krawinkel, occurred in San Cristóbal on March 3, 2008. The ruling coincides with the 11th anniversary of the Army officer’s   murder.