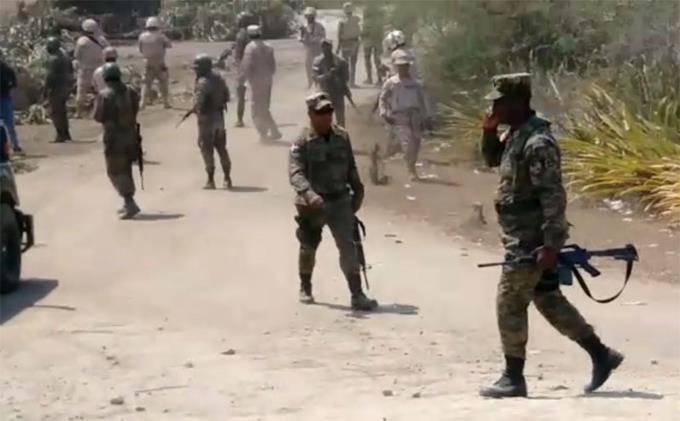 The Haitian nationals had three days threatening the agents of the Armed Forces and the Specialized Body of Land Border Security. EXTERNAL SOURCE

Two Haitians were wounded yesterday in the Carrizal community of Elías Piña after a hostile mob from that country crossed into the Dominican territory and fired shots, stones and bottles full of gasoline at members of the Armed Forces.

The mob came to the area where the officers were with hostile provocations, and despite the presence of a squad of soldiers stationed in the place, making peaceful warnings, they crossed the border and shot at the members of the Army and the Specialized Security Corps. Land Border (Cesfront), so that a shootout that dispersed the invaders originated.

The preliminary investigation showed that the perimeter of security established at the height of the pyramid 181, where the perimeter fence of the new Customs facilities in Carrizal is currently being built, the Haitian mob protested for three days on the border with tire burning. , and prevented the citizens of both nations from carrying out their usual activities in the market that take place on Fridays.

Paulino Sem regretted what happened to the Haitians, but maintained that the agents had to defend themselves against the vandals who threatened to attack them.

The reaction
“We had no other choice than to defend our physical and territorial integrity, opening fire on those who were on our side. This large mob of hooded Haitians was dispersed to their side, reorganizing in the town of Cachimán,” said the commander of the Third Army Infantry Brigade, Colonel Ángel Alfredo Camacho Ubiera, and the director of Cesfront, Colonel José Manuel Durán Infant. Violent incidents have arisen in the border area in recent months.

On January 6, a confrontation at the border post of Carrizal between members of Cesfront and numerous Haitians caused the death of a Dominican soldier identified as Oriano Montero, a native of Hondo Valle, and the death of a Haitian.

According to reports of this incident, during the brawl a Haitian killed the member of Cesfront, so a fellow soldier who was accompanying him proceeded to shoot the assailant.

Senator Sánchez Roa
Yesterday, the senator of Elías Piña, Adriano Sánchez Roa, said that Haitians who oppose the construction of the perimeter fence that will help to organize trade in that part of the border have reacted with hostility in recent days.

Sánchez Roa considered that this is a situation that the Armed Forces cannot allow.

Hostilities and subsequent Investigation.
The Haitians were repelled by the military posts in the security perimeter at the height of the pyramid 181.

The report.
The commission investigating the events will render a report as soon as possible.

Two dead.
On January 6, there was another violent incident where a Dominican soldier and a Haitian citizen were killed.