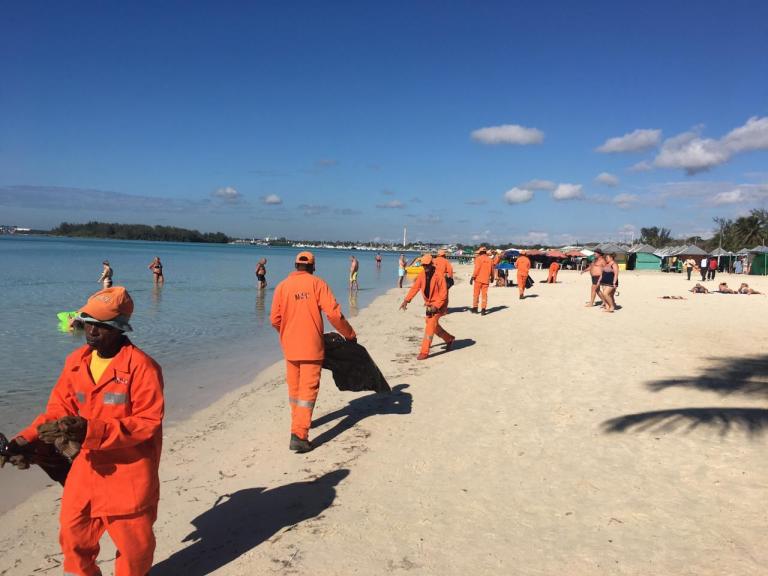 The Ministry of Public Works and Communications (MOPC) intervened on Friday at Boca Chica beach before the cluster of garbage that afflicted the tourist area could affect it.

The brigades of the Road Maintenance Program of the MOPC, removed tons of litter thrown in the vicinity of the beach where they operated with trucks provided by the institution.

According to a statement, about ten trucks were integrated into the cleaning work, ordered to clean the beach area completely, by Minister Gonzalo Castillo.

The intervention was made after the publication of a report by the newspaper Listín Diario. Workers were immediately transferred to collect and remove the trash.

Ten brigades amounting to 100 men from the Highway Maintenance Program, led by Army Lieutenant Colonel Douglas Borrell joined the cleanup work from the Boca Chica beach to Andrés beach, all along the coastline.

The morning paper said that in Lent and prior to Holy Week, when many choose to take a swim, the beach of the municipality of Boca Chica looks abandoned by the municipal authorities, tourism and those responsible for ensuring safety.

“Regarding the cleanliness, the Minister of Public Works ordered the immediate dispatch of the brigades, so from early Thursday they were moved to the place to leave the area completely clean,” said Douglas Borrell.

He said that the brigades will remain in the area until it is completely clean of garbage and debris.