Vehicle believed to be missing couple’s removed from sea. 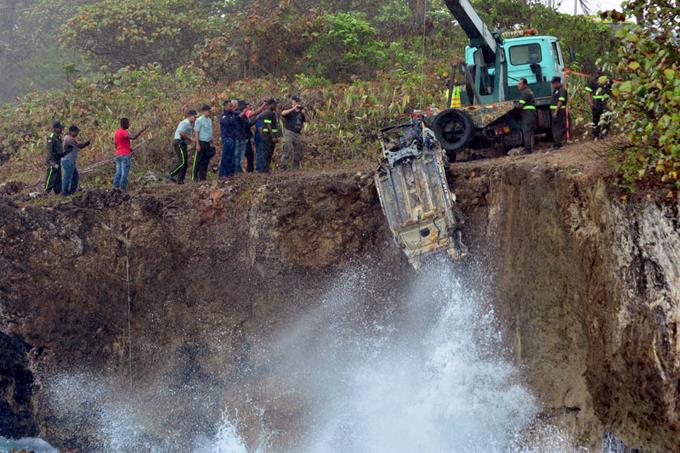 Due to ocean current conditions, three days elapsed before two “empirical” divers could be deployed to recover the white Kia Rio in which the alleged missing American couple was traveling on March 27 of this year.

The strong swell of the area (kilometer 19 of the Las Americas highway), the fear of some divers of the dangerousness of these waters and the low resistance of the crane cable that was used to extract the car, made a more agile operation impossible.

Between the presence of onlookers and the comments of the residents of the area, agents of the General Directorates of Traffic Safety and Land Transportation (Digesett) and the Central Criminal Investigation Center (Dicrim), hired two divers who were fishing in the maritime zone. They were offered a “chiripita” so that they could go into the waters of the Caribbean Sea, and remove the car Friday morning.

They succeeded after the two young men went down to the reef and confirmed that there was car wreckage in the location.

The agents began the work to remove the vehicle. Alberto de los Santos was one of the divers who participated in the operation. Once the target was stabilized, he attached a plastic gallon float to the chassis to determine the exact point where the vehicle submerged. For her part, Alison de los Santos dove to connect a cable to the car.

After an hour, the remaining structures of the shock absorber were hooked to the crane, thus starting the extraction. When the chassis came out, a sudden swell caused the rope to come loose and released the shock absorber.

After having a conversation with Alison and Alberto, the agents reorganized and began salvage of the car; resident bystanders lined the road in the vicinity of zone 19 of Las Americas Highway.

The divers took a long time to reach the reef as the waves were quite high. In the end, Alberto decided to give up, sat on one of the rocks, while Alison, fearlessly stood against the current and tied the car again. Then the crane began to recover the vehicle as onlookers surrounded the scene. Everyone was keenly interested in knowing what was happening.

Without wasting any time, Digesett’s team loaded the vehicle onto a truck, secured it, and took it to the Dicrim’s department.

Authorities are now investigating whether this vehicle was the one hired by Orlando Moore, 40, and Portia Ravenelle, 52, who came to the country on March 23 for a four-day vacation in Samana, on the northeast coast of the Dominican Republic. They were scheduled to arrive in the United States on the 27th of March.

According to the authorities, Ravenelle was found on the Las Americas highway and taken to the Darío Contreras hospital, where she died on April 4. The authorities, including the FBI, are waiting to verify if a body found on March 31 at sea belongs to Moore.