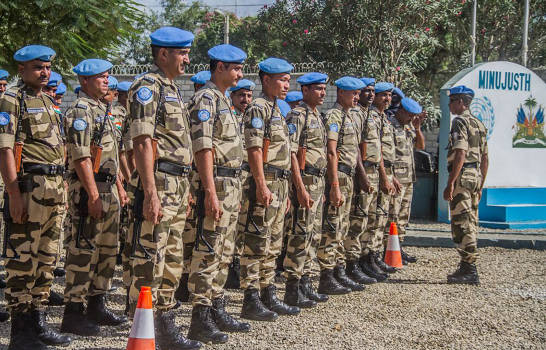 Last week, the Security Council of the United Nations decided, with the abstention of Russia and the Dominican Republic, to end next October its Mission of Support for Justice in Haiti (Minujusth).

The reactions to this measure transcend the Haitian territory, and in Dominican soil, there are also sectors that express their concern about the impact it can have in both countries, as well as the reasons that led the international organization to adopt that decision at a time when Haiti is experiencing a great political crisis.

Created in 2017, after the departure of the UN Stabilization Mission (Minustah), the Minujusth has the objective of supporting the consolidation of peace in the neighboring country. But the political scientist Joseph Harold Pierre contends that this force has not been felt within the Haitian people, where many citizens do not even realize their presence, so their exit will not have a significant impact.

He points out that having the Minujusth, with some 1200 members, the mission of accompanying the Haitian Police, which it has not done, the human rights situation has been aggravated by the political crisis during its presence in Haiti.

The sociologist Wilfredo Lozano, nevertheless, postulates that the moment was not propitious for the exit of the mission, due to the situation of political and social instability. That is why he sees the Dominican abstention before the Security Council as prudent and correct.

“It is correct because in the context of the crisis that Haiti has, with instability, which does not set the government, then that decision should have been better discussed,” he says.

He adds that the withdrawal of that force from the UN before installing a powerful replacement force that can take the necessary measures needed to ensure stability constitutes irresponsibility.

However, he questions that the position of the Dominican Republic is not part of a coherent foreign policy vis-à-vis Haiti, which does not exist and that is – in his opinion – necessary to improve relations between both countries.

Lozano acknowledges that the departure of the Minujusth brings uncertainty and could have consequences for the Dominicans; however, it’s considered offhand to make assertions in that sense.

The lawyer also specialized in the Haitian issue, Juan Manuel Rosario, warns that the departure of that mission is untimely and could have implications not only for the Dominican Republic but for the entire region.

“The departure of the Minujusth will be carried out in the most inopportune circumstances due to the great political crisis that currently prevails in Haiti, and at the moment when that country requires the efforts of the international community to avoid an overflow that affects not only the DR but also the entire international conglomerate in a general sense,” he said.

Last week, the Security Council of the United Nations decided, with the abstention of Russia and the Dominican Republic, to end next October its Mission of Support to the Justice of Haiti (Minujusth) withdrawing its agents from the neighboring country. The reactions to the measure transcend the Haitian territory and, in Dominican soil, there are also sectors that express their concern about the impact it can have in both countries, as well as the reasons that led the international organization to adopt that decision at a time when Haiti undergoes great political and social chaos.

It proposes that instead of the international community reducing efforts in Haiti should increase them due to the consequences that its instability could have in the entire region, and calls on the Dominican Republic to pay close attention to its migration policy and border security.

“The role of the Minujusth would call it a disincentive with respect to violence … and it is a small mission.”
— Joseph Harold, political scientist

The specialist in International Relations, Giovanni Báez, points out that the economic crises of the European Union and the directives of the foreign policy of the United States have caused a lack of funds in the UN programs that, together with the questioning of the effectiveness of The peace stabilization and institutional development missions make the support of that organization more selective and restrictive.

This decrease in resources attributes the decision regarding Haiti, whose consequences, he says, are manifested in the lack of policies for cooperation in developing institutionality and support to maintain public order.