Operational BDS for Holy Week: no more than two people on motorcycles 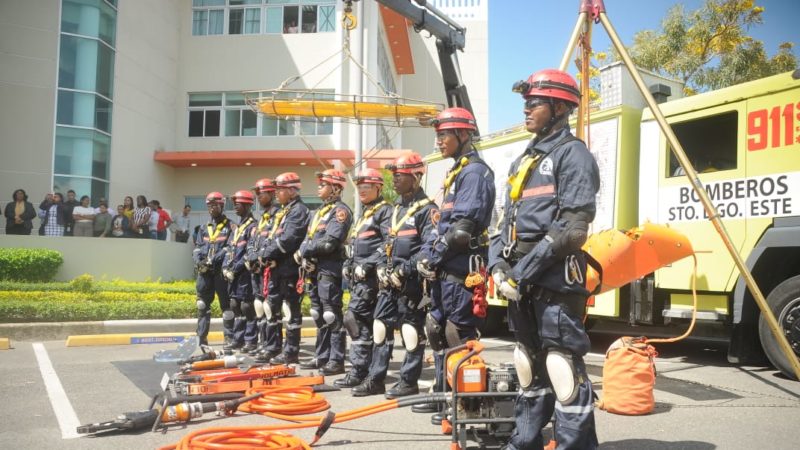 Bomberos or firefighters at the ready

The mayor of Santo Domingo Este together with other institutions that make up the Municipal Commission of Prevention, Mitigation and Response began the operation “Holy Week 2019, a Pact for Life” with which they seek to prevent accidents and save lives.

The announcement was made by Mayor Alfredo Martínez during a press conference at the Municipal Palace, in which the representatives of the agencies that make up the commission participated.

Similarly, rescuers who will work to prevent accidents and save lives will be exiled from 10 mobile units, medical equipment, cranes, mobile workshops and road assistance among other operational tools.

The municipal official indicated that in order to preserve life during the week-long holiday, it was arranged that no more than two people should ride on motorcycles, no passengers would be allowed in the back of open vehicles (trucks and vans) and only transit authorized heavy land vehicles.

Other measures that according to Mayor Martinez will be adopted are the prohibition of bathing in the southern coast of the Caribbean Sea (Avenida España and Las Américas Highway), in the springs near the V Centenario Racetrack and that the Balneario Cachón de la Rubia will be open until five in the afternoon.

“The prevention operation will start on April 18, Holy Thursday, from 2:00 pm and will culminate on the 21st, Resurrection Sunday, at 6:00 pm,” said the mayor of Santo Domingo Este.

He said that the Municipal Commission for Emergency Operations will have its main operating center in the Directorate of the Santo Domingo Province of Civil Defense and will be integrated by the institutions that make up the Risk Management System in the Municipality.

The official explained that the prevention and response posts will be located in the eastern part of the Juan Pablo Duarte bridge, the Juan Carlos on the Las Américas highway, on the corner of the Las Américas highway, Autovía de Samaná, in the police station of Los Prados de San Luis on the Mella highway, at the intersection of Guerra, in front of the Cristo Salvador cemetery and on the Cachón de la Rubia.

According to the information provided by Martínez, the National Police will reinforce patrolling throughout the municipality to ensure the integrity of the properties of citizens who venture outside the boundary and ensure that no excesses of any kind occur.

Alfredo Martinez said that Holy Week should be to reflect and take things slowly and urged the citizens not to drive if they drink alcoholic beverages.

He also said that in the municipality of Santo Domingo Este there will be a series of sports activities for children, young people, and adults who wish to stay at home.

The institutions that make up the Municipal Commission for Prevention, Mitigation and Response are the Mayor’s Office of Santo Domingo East, the Fire Department of Santo Domingo East, Civil Defense, Fire Department of San Luis, Ministry of Public Works and Communications, the Corps Specialized Tourism Security (CESTUR) the National Institute of Transit and Land Transportation (INTRAN), the Dominican Red Cross, the National System of Emergency and Security 911, the Ministry of Public Health and Social Assistance.

Present at the launch of the operation “Holy Week 2019, a Pact for Life” in Santo Domingo East were the governor Juan Frias, the president of the Council of Regidores, José Luis Flores, the councilor Edita Sandoval, the mayor of the SDE Fire Department and Javier Bueno among other authorities of that demarcation.