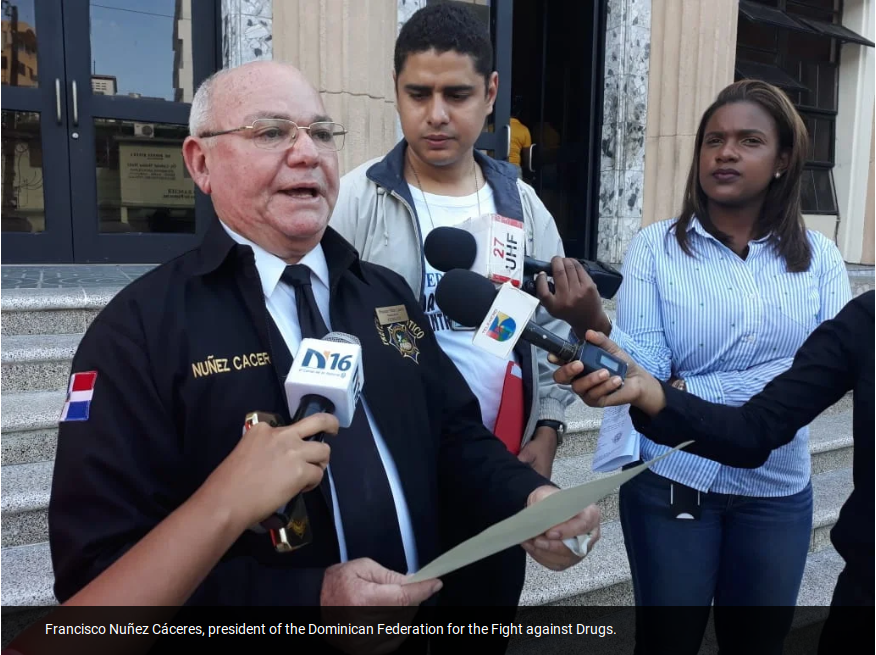 Francisco Nuñez Cáceres, president of the Dominican Federation for the Fight against Drugs.

The Dominican Federation for the Fight against Drugs (FEDELUCD) today rejected the legalization of marijuana for medical and recreational purposes, as proposed by neurosurgeon José Joaquín Puello.

The president of the entity, Francisco Núñez Cáceres, charged that there is an international laboratory that is promoting this initiative in the country without taking into account the damage it will cause in young people.

“Deep down there is a terrible situation, and we regret that institutions that fight against drug prevention are playing into their hands,” said Núñez Cáceres.

After censoring the proposal, the president of FEDELUCD insisted that young people start with marijuana and end up consuming other more harmful drugs.

He called on the legislators and the President of the Republic not to allow the legalization of marijuana in the Dominican Republic, “we have always said that something dark is hiding in this situation.”

He affirmed that in the countries where the drug has been legalized, which do not exceed ten, the results have been disastrous for young people, affecting the increase in school dropouts.

“Right now they are making cigarettes with marijuana, and that’s what you want, it’s a business you want, here it does not matter the health of the people or the damage to society, but the fortune of those magnates, who never tire of amassing riches,” he said.

This institution also opposed the use of ‘hookah’ which is a common practice among young people.

The executive director of Casa Abierta, Juan Radhames de la Rosa, today endorsed the proposal of neurosurgeon José Joaquín Puello, to open a debate with different sectors to discuss the possibility of decriminalizing marijuana for medicinal and recreational use.

He recalled that he had been a champion of marijuana being decriminalized in the Dominican Republic, as has been the case in other nations.

“We understand that the medicinal use of CBD, which is the substance extracted from the cannabis or marijuana plant, is a waste of the Dominican authorities’ vision, not allowing that substance to be of regulated use as another substance. Many people with health problems could benefit from that medicine, “he said.

FEDELUCD asked the National Institute of Traffic and Land Transportation (INTRANT) to strictly monitor anti-doping of bus drivers since according to him many of them are using drugs.
“There are a lot of bus drivers here who are using drugs, and I believe that INTRANT should take action on the matter,” he added.

He believes that drivers should be detoxed every four months since they are a danger in the streets.

The entity called the Dominican family to stay in meditation in their homes and not risk taking streets, which constitutes a situation of danger.

The institution announced the implementation of the Semana Santa Sin Drogas – Holy Week Without Drugs program.