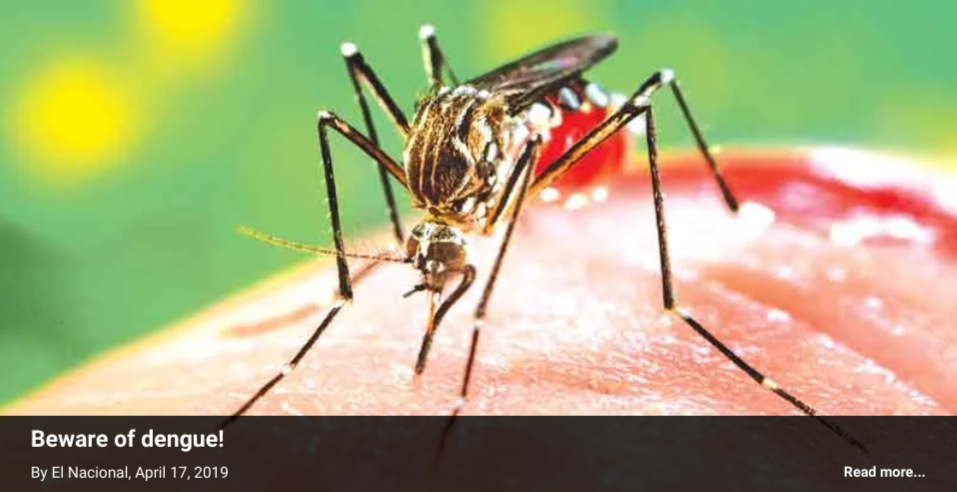 Aedes aegypti, the yellow fever mosquito, is a mosquito that can spread dengue fever, chikungunya, Zika fever, Mayaro and yellow fever viruses, and other disease agents.

The epidemiological bulletin of week 10 of the current year published by the General Directorate of Epidemiology of the Ministry of Public Health of the Dominican Republic (DIGEPI), in its summary of Obligatory Report Diseases posted on March 25, reports that there has been a considerable increase in cases of dengue compared to 2018. The total number of cases observed up to March 16 is 866, for an Incidence Rate of 43.5 (per 100,000 Inhabitants), while in the same period of 2018, 218 cases were registered for an Incidence Rate of 11.

The comparative analysis of the data from the last 4 epidemiological weeks of 2018 and 2019 shows a considerable increase in cases, mainly in the provinces of Barahona, Bahoruco, Independencia, and Peravia, placing these communities at the level of Epidemiological Alert.

Dengue fever is an infection caused by a virus that is transmitted by the bite of female mosquitoes of the genus Aedes aegypti. The disease is considered endemic in our country because the vector that transmits it was adapted to environmental conditions and is part of our environment. The rains facilitate the multiplication of mosquitoes and the increase of the disease.

Symptoms appear 4 to 10 days after the infective bite, and in the first days, the behavior of the disease is similar to the common flu. The clinical picture of dengue begins with a high fever of sudden onset (40 ° C) accompanied by two of the following symptoms and signs: severe headache, pain behind the eyeballs, muscle and joint pain, nausea, vomiting, enlarged lymph nodes lymphatic or rashes.

After the appearance of the first symptoms, the infected person can transmit the virus through the Aedes Aegypti mosquito, for 4 or 5 days. If the clinical picture is not complicated, the symptoms disappear before 12 days.

Severe or hemorrhagic dengue is a life-threatening complication because it occurs with plasma extravasation, fluid accumulation, respiratory distress, and severe bleeding.

Indicative signs and symptoms of this complication occur between 3 and 7 days after the onset of the disease and manifest with a sudden decrease in body temperature (less than 38 ° C) and severe abdominal pain, persistent vomiting, accelerated breathing, Bleeding from the gums, fatigue, restlessness, and presence of blood in the vomit.

If this complication is not managed according to the treatment protocols for hemorrhagic dengue, the prognosis in the next 24 to 48 hours will be extremely serious.

The diagnosis is based on the presence of dengue in the area, in the symptoms and in laboratory tests. In the blood count (blood test) we can observe a decrease in white blood cells (Leukopenia), decrease in platelets (Thrombocytopenia) and increase of hematocrit due to the hemoconcentration of red blood cells due to dehydration or leakage of blood vessels characteristic of severe dengue.

There is no specific treatment for dengue. Acetaminophen is recommended for fever. You should not take aspirin because it increases the danger of bleeding. Severe cases require hospitalization and must be managed in compliance with the corresponding protocols.

Prevention: There are no effective vaccines for the prevention of Dengue. The WHO/PAHO does not recommend vaccines circulating in the market because of their low efficacy and the dangerous side effects they produce.

The only preventive measure with positive results of impact in the short and medium term is the elimination of Aedes aegypti mosquitoes and their breeding sites.

This mosquito lives in urban habitat and lays its eggs on the surface of clean water that accumulates or deposits in containers inside houses or in patios. Unlike other mosquitoes, it feeds during the day mainly at the beginning of the morning and at dusk before it gets dark.

Integration and community participation are essential for the elimination of mosquitoes and their breeding sites. The elimination plans include:

Cover, empty and clean each week the containers where water is stored for domestic use; change the water in the vases.

Purify the waters for domestic use by adding a few drops of chlorine.
Use personal protection at home, such as using screens on doors and windows, mosquito nets, wearing long-sleeved clothing, and insecticides.

During epidemic outbreaks, emergency vector control measures may include the application of insecticides by spraying on streets, houses, yards and vacant lots.