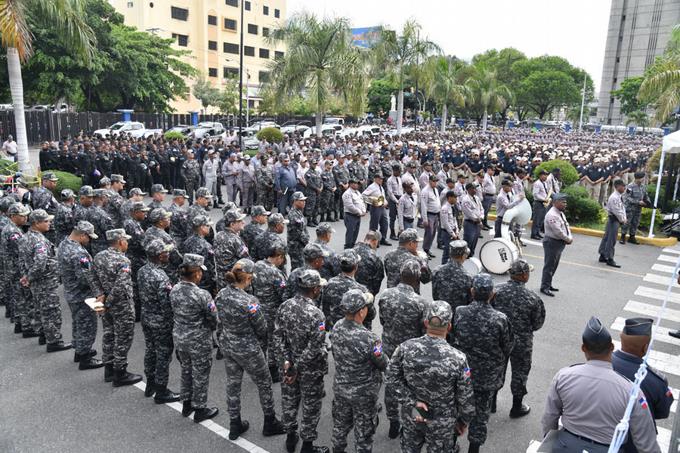 The director of the Police and the minister of the Armed Forces, concentrated yesterday the personnel that will be in the streets giving service during the Holy Week. VÍCTOR RAMÍREZ 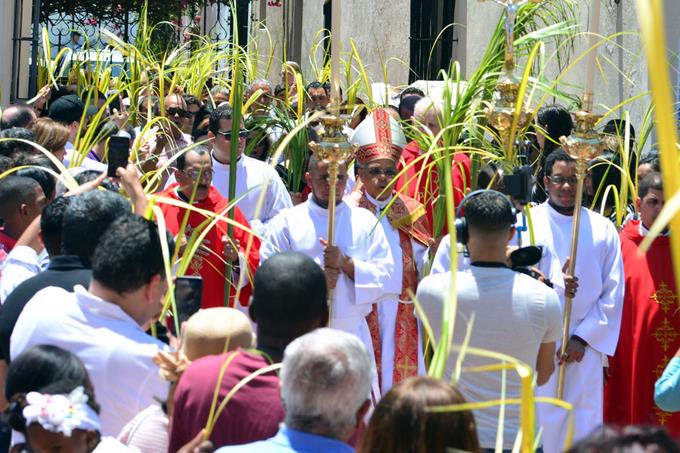 The National Police and the Ministry of Defense deployed more than 36,000 agents and soldiers yesterday to reinforce security at strategic points in the country during the Easter holiday.

Members of the police and military personnel will be located on beaches, rivers, resorts, shopping centers, churches, roads, and nightclubs, among others.

The action is a direct part of the operation “Pact for Life: Holy Week 2019”, which starts today under the coordination of the Emergency Operations Center (COE), where the event was held.

The director of the National Police, Major General Ney Aldrin Bautista, took the opportunity to urge the population to respect the measures introduced by the authorities. “If the resort where you are going is closed, avoid a clash with the authorities, do not protest, just follow the information they give you,” said Bautista.

Of these 36,000 members, a total of 26,155 belong to the National Police while 10,134 belong to the Ministry of Defense. The troops will support matters of citizen security for the holiday of Holy Week.

The Minister of Defense, Rubén Darío Paulino Sem, who also attended the event, indicated that the Armed Forces will contribute 10,134 members of his institution and several mobile units.

The Ministry of Defense also put at the disposal of the COE, three helicopters, 477 trucks, 128 motorcycles, 21 rubber workshops, 23 mobile workshops, 36 cranes, 39 ambulances, 20 medical tents, and seven rescue teams to protect 16 runners during the holiday of the Greater Week.

The police and military authorities advised to the population not to drive in a state of intoxication, to respect the schedule of closing the rivers and beaches at 6:00 in the afternoon, and to avoid inconveniences by not using enclosed spaces.

Details of the COE

The director of the COE, General Juan Manuel Méndez, announced that they will have the support of 45,521 people, including brigadistas, doctors, paramedics, military and police.

The last days of this week, Thursday, Friday and Holy Saturday, Catholics around the world will fill the temples, among the first Dominicans who are rooted in their historical traditions, rites and customs of the Catholic faith that for the first time came to the American continent through these lands.

This year the Archdiocese of Santo Domingo, headed by the Archbishop, Monsignor Francisco Ozoria Acosta, Archbishop of America, has enlarged the places and the number of celebrations of the Easter Triduum (the three sacred days), whose rites go back to the first four centuries of the church.

Monsignor Ozoria has called on the Dominican people to behave with moderation in their neighborhoods and in the places they will travel during the long holiday of Holy Week. “It is the most intense ceremonial moment of the year. However, for many Catholics, it has become only an occasion for rest and fun. They forget the essentials: this week we must devote it to prayer and reflection in the mysteries of the Passion and Death of the Lord to take advantage of all the graces that this brings us.”

Equally, the Archbishop of Santiago, Monsignor Freddy Bretón Martínez, called on the authorities to work to reduce the acts of violence, crimes and prevent accidents. He announced a long calendar of celebrations that extend to all the municipalities and towns of the provinces of Santiago and Espaillat. The dioceses of Puerto Plata, San Francisco de Macoris, Mao, and La Vega.

With the procession of Palm Sunday, the rites of Holy Week began, but Thursday, Friday and Saturday, are the most sacred days and time for recollection and reflection.

Thursday worship begins with the Chrism Mass, which is celebrated in the morning in all dioceses of the country, presided over by each diocesan bishop and concelebrated by all priests (presbytery).

In Father Kennedy Rodríguez, director of communications of the Archdiocese of Santo Domingo, reported that the Chrism Mass will be at 9:00 in the morning, headed by Archbishop Ozoria and his three auxiliary bishops, and the commemorative mass of the Lord’s Supper at 8:00 p.m., and the Blessed Sacrament from 9:30 a.m. to 12:00 p.m. at midnight.

On Holy Friday for the adoration of the Most Holy in the special monuments, temples, and the churches will be opened at 6:00 in the morning and the rites of the Passion of the Lord Friday will all be at the same time: 3:00 in the afternoon.

In the Cathedral, they include the traditional Sermon of the Seven Words, from 1:00 in the afternoon. The great Easter vigil on Saturday, awaiting the resurrection of the Lord, in the Cathedral the Archbishop Ozoria initiates it at 8:00 a.m. the night.