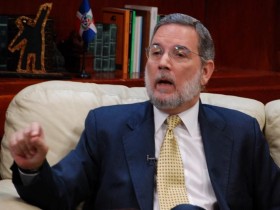 Santo Domingo.- National Police chaplain, Alejandro Cabrera on Sun. said the Catholic Church expressed its feelings through the Easter sermons, when the priests criticized the Government.

In the Resurrection Sunday Mass at Police headquarters, Cabrera called on government officials for peace and to avert disputes.

“What they have said was the feeling of the Church, but we should not add poison, we should not add fuel to the fire and we appeal to all Dominicans that we should live in peace, nobody wants confrontations … let’s look at what unites us, that is God in our hearts, risen Jesus Christ, ” he said in response to presidency spokesman Roberto Rodriguez Marchena.

The Police chaplain invited Rodríguez Marchena to visit the Church.

“We extend an invitation to the spokesman, with all love and respect, to visit the Church, he has made a mistake, our churches are crowded with people these days, all the churches were full, that is, it seems that he is not visiting the church, we invite you to participate in the religious acts of the church,” said Cabrera.

Rodriguez Marchena tweeted the results of a Gallup poll on the percentage of American adults who say they have no religious preference, which doubled from 8% in 2000 to approximately 19% in 2018.

The tweet: “Approximately 1 in 4 American adults today are religious but are not members of a church, synagogue or mosque.”