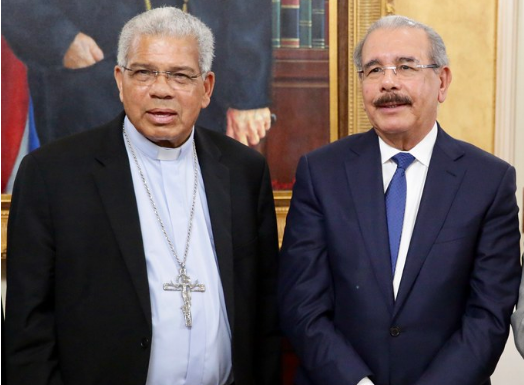 Santo Domingo.- President Danilo Medina on Tues. received Santo Domingo Archbishop Francisco Ozoria, in the National Palace, just days after the prelate slammed the chief executive’s reelection moves which he affirmed could lead to a “dictatorship.”

“It was a work meeting and fraternal dialogue, where they followed up on projects that the Catholic Church has brought to the Government for the benefit of the communities,” the Presidency said in a statement

Discussed at the meeting was the construction of a temple in Bayaguana (east), “which will give pilgrims and parishioners a more modern temple that will positively impact the area.”

Ozoria, accompanied by two other bishops, ruffled political feathers during the Easter Sermon, warning that the country “could fall into a dictatorship.”