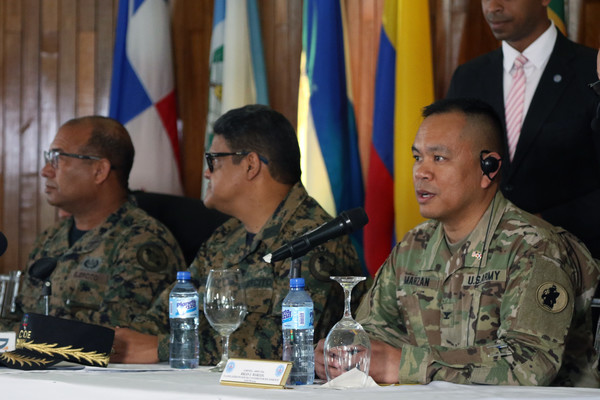 Santo Domingo.– Over 300 military forces and humanitarian assistance/disaster relief personnel gathered for the opening ceremony for Fuerzas Aliadas Humanitarias, May 6, 2019, at the Ministry of Defense in Santo Domingo.

The ceremony inaugurated the start of the 12-day scenario driven exercise that will simulate natural disasters and man-made crises that threaten the region.

“Through this exercise we gain the opportunity to share information, best practices and collaborate with other partner nations and strengthen our capabilities to respond to humanitarian assistance/disaster relief situations,” said Col. Brian Marzan, co-director of FA-HUM 2019 and Chief of the Training Exercise Division for U.S. Army South.

“I would want the community to see the first responders deal with the situations at hand and have a process by which civilians can turn to and feel confident that the disaster or crisis situation is under control,” Marzan added.

The U.S. Southern Command-sponsored, U.S. Army South-conducted exercise is designed to build partner nation-capacity for civil and military response to major disasters and to improve and strengthen regional civil-military collaboration.

“In the name of the Constitutional President of the Dominican Republic, Mr. Danilo Medina Sanchez, as well as the Lt. Gen. Ruben Dario Paulino, Minister of Defense and on behalf of the Emergency Operations Center, I thank the government of the United States of America, the U.S. Southern Command and U.S. Army South, for their invaluable support and the development of this transcendental exercise that we will carry out,” said Brig.Gen. Juan Mendez Garcia, the Dominican Republic director of the Center of Emergency Operations.

“I want to emphasize that for almost 20 years the Dominican Republic has participated in the FA- HUM exercises, this being the second time that we are the host country of what I consider the most important event of it’s kind in the entire region.”

“In the last 10 years, the region has been hit by catastrophic phenomena such as: the earthquakes of Haiti, Chile, Ecuador, Mexico, the volatile eruption of Guatemala; The hurricanes Jose, Maria, Matthew and Irma,” Mendez Garcia said. “All of these phenomena have tested the capacity of the national and international response of the countries impacted in the region.

During the exercise, disaster management agencies and regional military forces plan to strengthen professional relationships and collaborate in order to reduce the loss of life and suffering in the event of the simulated disasters.

“It is evident that learning the development of skills and abilities acquired in this type of exercise, have allowed us to strengthen a collection of good practices and lessons learned that in their totality have facilitated the appropriate management in the last decade of the impact of these adverse events that have affected the region.”

The white cell, or scenario writers, will communicate to the participants when the fictitious hurricane, earthquake or flooding is happening and the region that is affected. Military and civil support are tasked with responding in a timely manner and providing relief.

“By the end of the exercise we are hoping to gain the visibility and regional growth for other countries in the Central American region to get more involved in humanitarian assistance and disaster relief efforts,” said Marzan. “ We hope to enhance our partner nation’s capacity and capability to deal with natural and man-made disasters.”