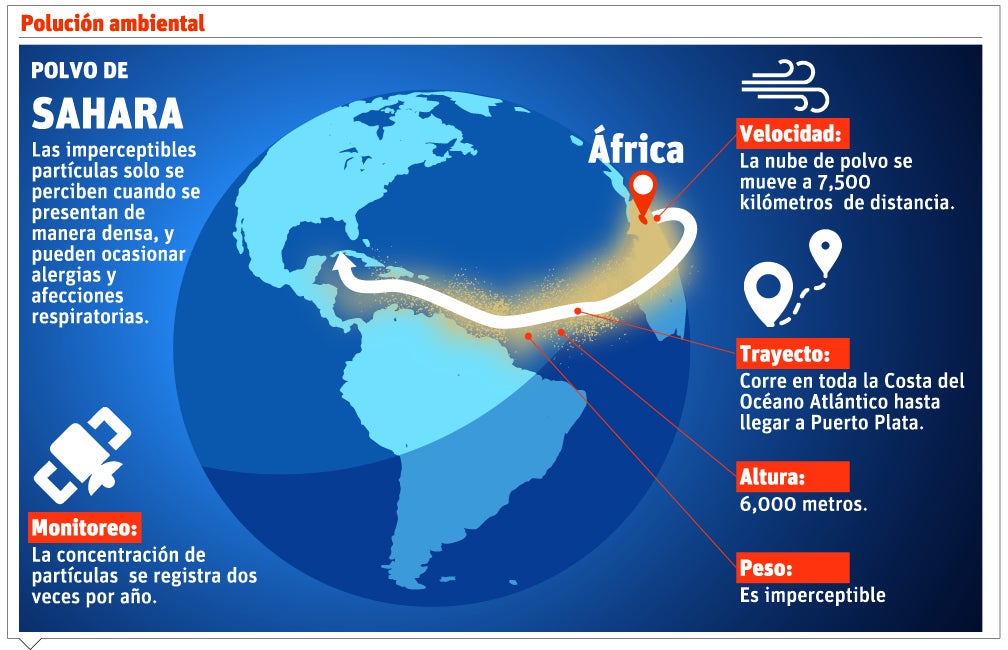 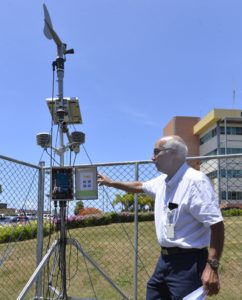 The particulate material that is arriving in the country, known as the dust of Sahara, Africa, is part of the cause of the heat and humidity that the climate registers. That revelation, based on the direction brought by the winds, was made by José Andrés Rodríguez, in charge of the Department of Air Quality of the Ministry of the Environment.
The microscopic particles are imperceptible if they do not emanate in large quantities; can generate allergies and respiratory diseases, so Rodriguez recommended the use of masks and sunglasses to protect themselves.

“Particles smaller than 2.5 microns when they are in the environment, people inhale them and reach them into the alveoli, and if they have heavy materials, such as chromium, nickel, and other elements, they can cause cancer if people are exposed constantly,” Rodríguez said.

Because of the minor effects related to these particles, around 100 million people die each year in the world, especially in rural areas where they use firewood as fuel. The same happens with the soot of the stoves if they do not have good combustion, according to Rodríguez.

Every year the dust arrives from different parts of the world, especially from Africa, from the Sahara desert. This time the clouds of dust are from North Africa, they blow from the south of the Sahara over the Atlantic Ocean, and they are driven through the Canary Islands, to the south, by the easterly winds, this is confirmed in the forecasts via meteorological radars through of its sensors and NASA.

The expert affirms that a part of said dust has an orange color, similar to that of the sand of the beach, and it is appreciated through the filters used in the monitoring stations located in the Environment, as well as in the National Office of Meteorology.

Rodriguez specified that the particles of the Sahara desert have a brownish hue, similar to the earth. The monitoring of air pollution by the Ministry of Environment is part of the recommendations of the World Health Organization (WHO).

In the country, the levels of particles in the air come from sources such as mobile units (vehicles), power plants, combustion by burning wood and garbage, tree pollen, etc., and exceed standards.

For that reason, the country is on alert to improve and there are factors that are indicators of pollution that can cause respiratory diseases. To decrease the pollution so the population can breathe cleaner air.

The official maintains that it is necessary to create an effective system of limiting the main source of pollution, which are vehicles. “The verification proposed by the National Institute of Land Transportation will reduce contamination of PM10 by up to 30%, and 2.5% by requiring a catalytic system,” Rodríguez contends.

That means that each imported vehicle brings a certificate and emission of CO2 to travel on the roads.
According to Rodríguez, the Intrant is working towards the creation of workshops to ensure that the vehicles have catalytic systems.

The environmental institution has six stations in total, one in its headquarters, another in the Onamet, in the municipality of Haina, San Pedro de Macoris (Central Eastern University), Santiago, in Utesa, and another in Puerto Plata.

It will also place new monitoring modules in Baní and La Romana, starting from the population density, since from 0 to a million inhabitants it requires a PM10 station (particles smaller than 10 microns), to determine the volume or quantity that falls.

Each one has the capacity to cover a population of fewer than one million inhabitants; from one to four million, two stations and four million, three PM10 stations are required, according to the World Health Organization to maintain a strict monitoring of pollutants, and recommends monitoring the PM10 and 2.5 particles because they cause death.

The stations have high volume collectors that suck about 40 cubic feet per minute of ambient air, which have some sieves that separate and filter out the particles, leaving the largest in a plate and the smallest pass to a collection filter.

Those obtained in this filter are weighed and the amount of particles is calculated in 24 hours. The analysis is carried out every six days, and in addition to the PM10, the wind speed, rain, pressure, and temperature are measured, and its origin is known.

Among the pollutants are carbon monoxide, sulfur dioxide, nitrogen dioxide, ozone, and particulate PM10. The limits are 50 micrograms per cubic meter, for 2.5 and it is established around 65, 15, the latter is a threshold limit in 24 hours and 65 the highest that is established. 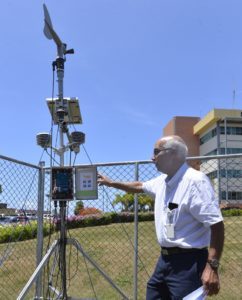 José Andrés Rodríguez shows how the particles are captured.

-2- Chip
It is discharged every month, it registers temperature, humidity, atmospheric pressure, and heat level.