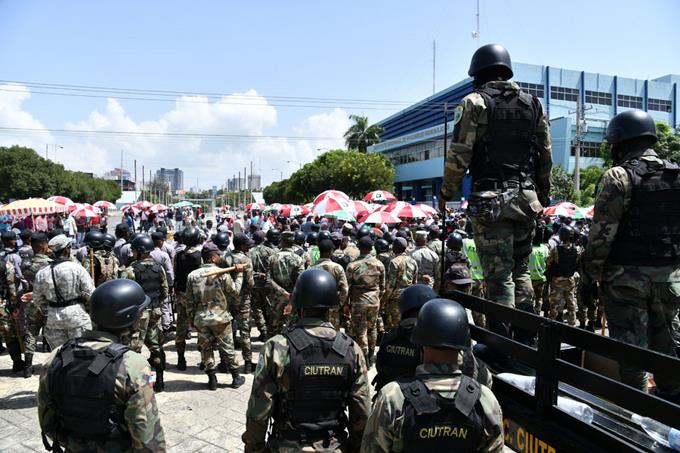 The troops that were deployed in the perimeter of the National Congress were withdrawn yesterday after the president of the Senate requested it. / VÍCTOR RAMÍREZ

After more than a week of military and police encirclement around the National Congress, the president of the Senate announced yesterday that he gave instructions for their withdrawal, but not before taking the necessary precautions.

During this Wednesday’s session, Reinaldo Pared Pérez announced that he had spoken with the defense minister, Lieutenant General Rubén Darío Paulino Sem, and the director of the National Police, Major General Ney Aldrin Bautista Almonte, for the withdrawal of the units that had been reinforcing security outside the legislative house.

There were no troops inside
However, he clarified that it would only be done in the vicinity of the building “because it is not true that they have been inside the building.”

He revealed that the police chief informed him that twelve “cabezotes” (big heads) would be sent to the place.

The order comes after the frictions experienced in the Congress in recent weeks before a possible constitutional reform that allows the re-postulation of President Danilo Medina.

Because of the situation, Pared Perez had ordered the strengthening of security in the Congress building on the 24th of last month after receiving intelligence reports that groups led by legislators would occupy its facilities.

Minutes after Pared Pérez made the announcement, the troops began to march, but the usual security teams remained in the National Congress.

Hours before the place remained heavily militarized in the presence of hundreds of people who appeared in front of the headquarters in protest against the rumor that the proposal for the reform of the Constitution would be presented.

Senate meets
The Senate met yesterday amid the increasingly growing rumor that the proposal to reform the Constitution, to approve the authorization of President Danilo Medina, would be presented.

In response to these rumors, hundreds of people showed up in front of the headquarters of the National Congress holding banners where they demonstrated against these alleged intentions.

After about 15 minutes, and guarded by increased troops of the National Police and the Army, they withdrew.

Whereas in the interior, the Senate continued with its regular agenda and the rumored subject of the constitutional reform did not appear.

In the Lower House
While hours earlier, the session of the Chamber of Deputies was suspended without the approval of any project.

In the session, which lasted for more than three hours, nine projects remained on the table because they did not have the necessary votes.

This time deputies of the current of ex-president Leonel Fernandez and those of the PRM abstained from participating, although they were present. The foremost leaders of the PRM had conditioned their participation in the voting of any bill to which the military and police were removed from the perimeter of the National Congress.

The National Congress remained strongly militarized before the “threat” that demonstrators could take the seat of this state power in rejection of the introduction of a legislative initiative to call for constitutional reform to enable presidential re-election.

The Leonelists
Deputies remained in the Chamber of Deputies after the suspension of the session to stay alert to a possible submission of the constitutional reform project by legislators who follow the guidelines of President Danilo Medina.