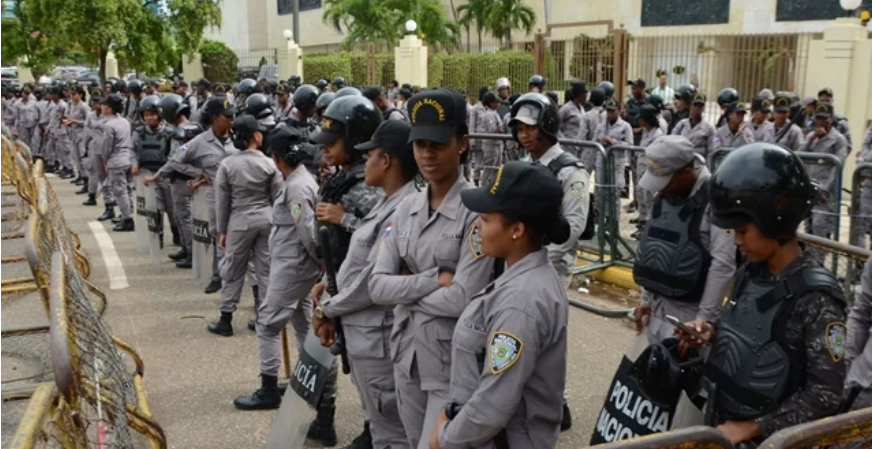 SANTO DOMINGO.- Hundreds of police and military officers returned this morning to surround the National Congress before the call for new demonstrations against the readiness to reform the Constitution.
Civil society groups linked to the Coalition for the Defense of the Constitution and Democracy began to sign today in the vicinity of the legislative headquarters a book in rejection of a variation of the Magna Carta for re-election purposes.

Police anti-riot troops placed three lines of metal fences on the front of the National Congress and an equal number of officers’ cords equipped with shields, weapons, and clubs.

The agents in groups of 10 and 12 members are scattered around the perimeter of the legislative seat and remain vigilant before the arrival of opponents of the Magna Carta reform.

Although the vehicles travel normally along Avenida Jiménez de Moya, which extends to the front of the Congress, the presence of agents who move on foot, motorcycles and mobile jails is notorious. The presence of the agents extends, even, to the proximities of the stop of the Metro of Santo Domingo, in the avenue Independencia.

Starting today, demonstrations are expected from opposition parties, social groups, drivers and the entities grouped in the so-called Social Platform, which oppose the reform of the Substantive Charter.
Last Wednesday and after nine days of the militarization of the Congress and the Center of Heroes, the president of the Senate, Reinaldo Pared Pérez, ordered the Ministry of Defense and the police to withdraw the agents deployed in the area.

According to Pared Perez and the president of the Chamber of Deputies, Radhamés Camacho, it was feared that legislators, social and political groups that reject a reinstatement of President Danilo Medina would occupy the Congress in protest of the readiness to vary the Constitution.

The militarization of the area provoked the protest of leaders of the Social Christian Reformist (PRSC), Revolucionario Moderno (PRM) and the sector led by former President Fernández in the Liberation Party.

The militarization of the surroundings of the Congress began on June 24 when police troops confronted Leonelistas deputies, students and community leaders who tried to mount a camp in front of the Congress.
In the incident the agents threw tear gas bombs at the legislators, resulting in several injuries and hospitalized the deputy Leonelista Henry Merán.

President Medina has said on several occasions that he will say “shortly” if he aspires to a new repostulation or not, and the population is still waiting.

Last week pilgrims to Congress social and political groups, housewives, motoconchistas and other entities with black outfits and banners against re-election, protested in the vicinity of the legislative seat.

In the session last Tuesday there were moments of tension when the PRM spokesman, Ronald Sanchez, reported that an agent of the Army J-2 had entered the Chamber of Deputies sessions to record statements from his classmate and of the Faride Raful party.

That day also 35 deputies who follow the current President Fernandez accused the President of the Republic of being responsible for the militarization of the Congress and surrounding areas.

Leonel complaint
The former president Fernandez denounced yesterday in an assembly of his political group that “there is a labor anti sentiment in the shade” that seeks to attract legislators to modify the Constitution of the Republic that he predicted will be a “forced process,” so from this Monday onwards his fight against Congress with the signing of a book against a new reform.

Leonelist deputies affirmed yesterday that President Medina and his sector will have a meeting today in which they will receive their political lines.

“This struggle will be won by the Dominican people who will overturn the National Congress current position,” Fernandez proclaimed in his speech to the leaders and supporters present, who were not allowed to enter with cell phones.