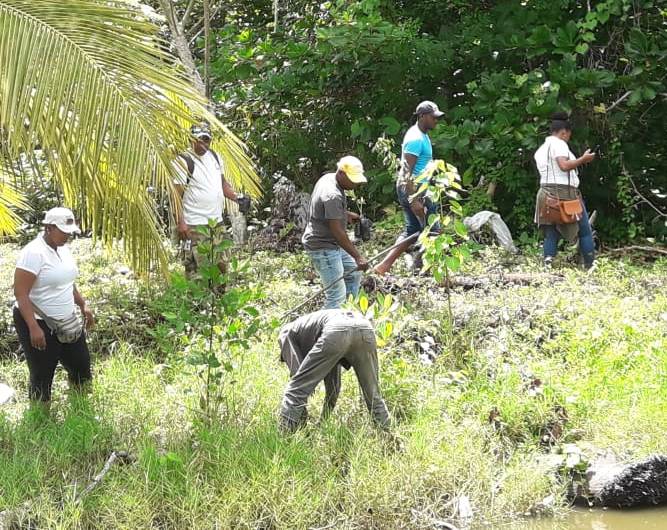 In order to celebrate this Friday the International Day of the Mangrove Ecosystem, the Coastal Biodiversity Project in coordination with the Ministry of Environment and Tourism held a cleaning day at the Las Galeras de Samaná clown, with the Red Mangrove recovery goal.

Several species of turtles and fish inhabit the area, so that 1,200 plants of mangrove buttons, red and white were reforested.

Marine biologists Lemuel Familia and Pedro Martínez explained the importance of mangroves and the damage caused by indiscriminate logging, which they say is due to lack of the citizenry’s awareness.

The mangrove ecosystem helps to mitigate the effects of climate change and its conservation can make a difference for coastal countries especially vulnerable to natural phenomena, such as the Dominican Republic.

For this reason in Montecristi, San Cristóbal and Santo Domingo, mangrove production nurseries have been installed where seeds are obtained from the plants that inhabit them, whose “peculiarities” allow them to adapt “to environments with low oxygen, high salinity, and high temperatures,” explained Cristina de la Rosa, in charge of Programs for the Restoration of Coastal and Marine Ecosystems of the Ministry of Environment.

De la Rosa explained the importance of preserving and recovering these ecosystems, coinciding with the International Mangrove Ecosystem Defense Day, which is celebrated every July 26.

Mangroves are “barriers to the protection of coastal and coastal communities” capable of cushioning the impact of marine storms and controlling erosion, are a refuge for different animal species and absorb and store carbon to a much greater extent than terrestrial ecosystems, said De la Rosa.