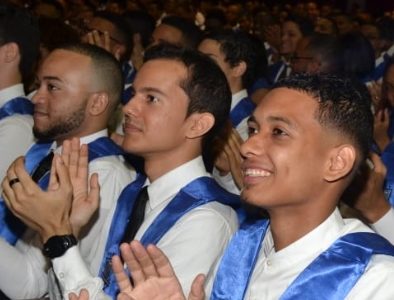 Some of the young people who graduated from ITLA.

Boca Chica. – The Technological Institute of the Americas ( ITLA ) held its eleventh ordinary graduation on Saturday in which 379 new professionals graduated in different areas of technology.

The ceremony took place at Casa San Pablo and was led by the rector of the José Armando Tavárez Academy, who stressed that most of his graduates work in executive positions within their labor field or successfully launching their own business.

Tavárez urged graduates to continue on the path of technological education, due to the high demand of ICT professionals to sustain scientific and technological development at global, regional and national levels.

At his side, the keynote speaker Antonio Caparrós, executive director of Inicia Educación, said that there is no more influential variable in the life of a person or in a society than a good educational system.

He told graduates that the country needs a lot of their technical knowledge and job skills such as those they have already developed at ITLA.