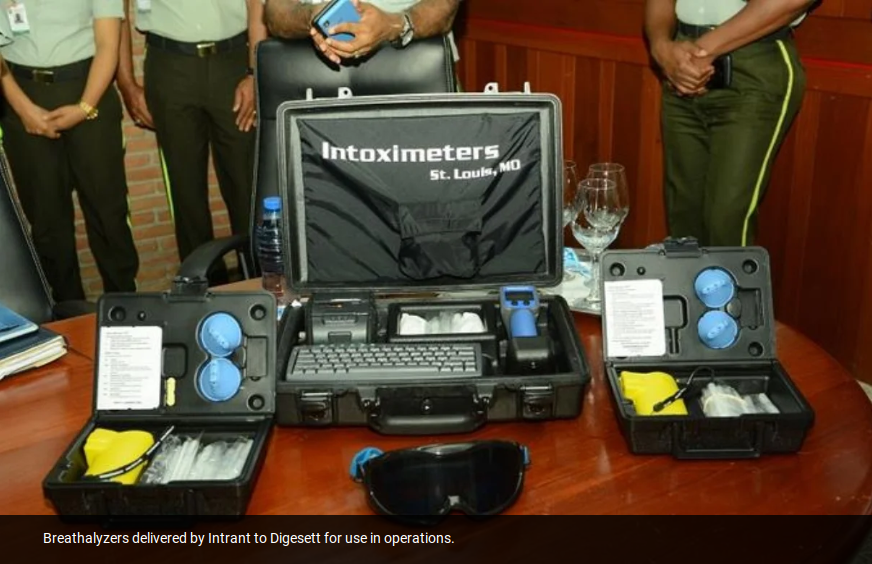 Breathalyzers delivered by Intrant to Digesett for use in operations.

Not only will motor vehicle drivers who do so under the influence of alcohol be arrested and fined, but also pedestrians who walk on public roads in a drunken state, according to a booklet circulated by the National Traffic Institute and Ground Transportation (INTRANT).

INTRANT points out that in cases where a pedestrian or the driver of a vehicle refuses to take the breathalyzer test ordered by an agent of the General Directorate of Land Safety and Traffic (DIGESETT), he will take it to the nearest peace court or Traffic Court.

Article 259 of Law 63-17 expressly states: “The breathalyzer tests shall be carried out on drivers and pedestrians who must exhale on the instrument, in order to detect the presence of alcohol in the breath and determine the degree consumed.”

Meanwhile, article 262, states that alcoholimetry or toxicological testing may be practiced in a preventive manner, either circumstantial or as part of operations to people who are in public places and who intend to drive motor vehicles.

According to the INTRANT brochure, the breathalyzer tests will be carried out randomly to pedestrians and drivers by Digesett agents, when there are suspicions or signs that the citizen may be walking or driving under the influence of alcohol.

Although the same law states that Digesett agents may stop drivers who test positive for up to four hours, it does not establish measures against pedestrians.

The brochure is part of the campaign of the official entity entitled “# Take it seriously, if you drink, do not drive,” which seeks to prevent traffic accidents due to intoxication.

However, when the case is of drivers of vehicles intended for public passenger transport, as well as drivers of freight, taxi or school transport, they must have absolutely no alcohol in the body.

For those who ride motorcycles the degree of alcohol allowed by law is 0.1 milligrams per liter in exhaled air.

All tests must be done by the Digesett.

According to the Dictionary of the Royal Academy of the Spanish Language, pedestrians are those who walk on public roads. Another meaning is ordinary mail in charge of conducting correspondence between nearby towns.