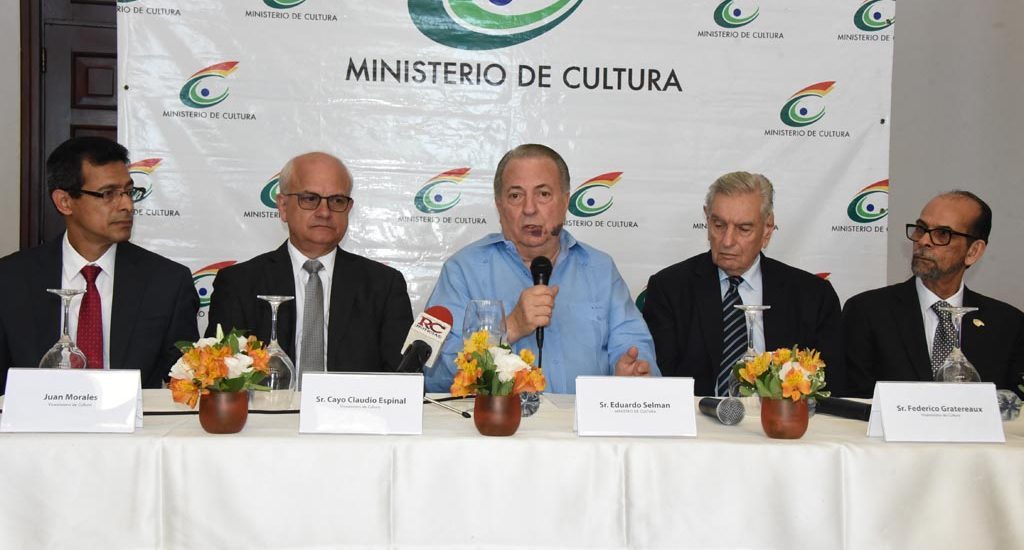 SANTO DOMINGO.-  The Ministry of Culture announced the program of events that will take place in the remaining months of 2019, including the October 24-27 celebration of the 15th Regional Book and Culture Fair to be carried out in the province of Monte Plata.

Details of the realization of the cultural events were offered this Wednesday in a meeting with the press at the headquarters of the state entity which was headed by the Minister of Culture, architect Eduardo Selman, accompanied by other authorities of the Ministry of Culture and the province Monte Plata

In the act of announcing the activities also spoke Ruth Herrera, director of Book Fairs; the senator of Monte Plata, Charlie Mariotti; the general director of Fine Arts, Félix Germán and the director of the National Theater Festival, Karina Noble.

Program for the remainder of 2019

Selman informed that in addition to the celebration of the 15th Regional Book and Culture Fair 2019, the program includes the Meeting of Brotherhoods, to celebrate National Folklore Day, to be held next Saturday, August 24, at 4:00 p.m. afternoon, in Plaza España of the Colonial City.

For the period from September 5 to 15, the National Theater Festival will be held and from October 24 to 27 the Regional Book Fair Monte Plata 2019. Actress Karina Noble informed that 20 groups will participate in this event that will offer 50 functions and that it will be dedicated to the theater master Servio Uribe.

From November 7 to 14 the National Poetry Festival will be held and from the 19th to the 30th of the same month the Emilio Aparicio National Festival, an event that is organized by the Narciso González Cultural Center.

The traditional Long Night of the Museums, winter version, will be held on December 14, to celebrate National Merengue Day and Nonviolence against women. The inauguration of the renovated Museum of Modern Art is scheduled for December 19, with the closing and awarding of the Twenty-Ninth Visual Arts Biennial awards.

Selman held the main table of the event accompanied by the Vice Ministers of Culture: Cayo Claudio Espinal, Carlos Santos, Juan Morales, and Federico Henríquez Gratereaux, in addition to the director of Fine Arts, Felix Germán.

From Monte Plata, were present, in addition to Senator Mariotti, the governor of the province, Nicio Rosario and the mayor of the municipality of Monte Plata, Jesús Contreras.

Minister Selman said that the Ministry of Culture will develop an extensive program of activities in the remainder of the year 2019, which are part of the cultural policies that are implemented at the national level.

Selman placed special emphasis on the Monte Plata Regional Book Fair 2019, in which he said, the literary and cultural program will be launched during the days of its celebration.

He stressed that this is an already traditional activity of the Dominican State that has the support of the government of President Danilo Medina, which is aimed at stimulating the publishing and reading industry in the region in which it is celebrated.

After presenting the delegation of that province present at the event, Minister Selman asked Senator Mariotti to take the floor. The legislator highlighted the ecological, cultural and historical benefits of Monte Plata.

He said that this province and the remaining ones that make up the eastern region of the country welcome the celebration of this fair version dedicated to the writer Miguel Ángel Monclús.

While Ruth Herrera offered details of the fair, indicating that writers and bookstores from El Seibo, Hato Mayor, La Altagracia, La Romana, San Pedro de Macorís and Monte Plata will participate in it.

The Monte Plata Regional Book Fair 2019 will stage the municipal park and halls of the town hall and the library of the Monte Plata Municipality.