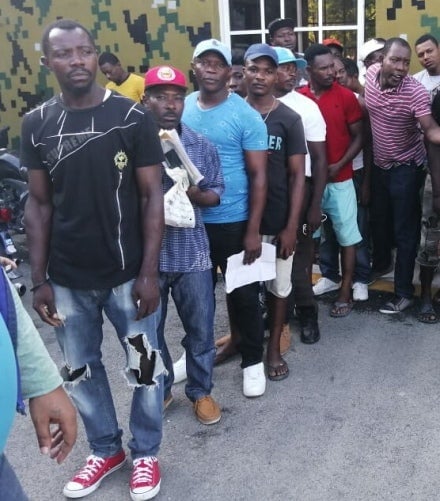 SANTO DOMINGO.- The General Directorate of Migration (DGM) deported 895 Haitian nationals out of 1078 detained in migratory interdiction operations carried out September 16-20, in nine provinces of the country and the National District.

Of the Haitian nationals, 183 were processed and dispatched. The arrests occurred in the provinces of Azua, Dajabón, Montecristi, Monsignor Nouel, San Cristóbal, Santiago de los Caballeros, Santiago Rodríguez, Santo Domingo (East and North municipalities) and Valverde and the National District.

The operations of the DGM were carried out by inspectors of the institution assisted by members of the Army, Navy and Air Force of the Dominican Republic; of the National Police, of CESTUR, representatives of the Public Ministry and of Environment and Natural Resources.

The information provided by the DGM indicates that after debugging the detainees, it deported 895 through the border points of Dajabón and Elías Piña, always respecting the dignity and human rights of citizens.

According to the information, the operations were carried out in the Los Pilones sectors of Azua; Olympic Village, Hato Mayor and Puñal, of Santiago; Santiago de la Cruz and Loma de Cabrera, of Dajabón; Piedra Blanca y Maimón, by Monsignor Nouel; Botoncillo y Arrozal, from Montecristi; and Restoration, Boca de Mao and La Reforma, of Valverde, among other places in different provinces.