Today baseball starts: the passion of the Dominicans has arrived! 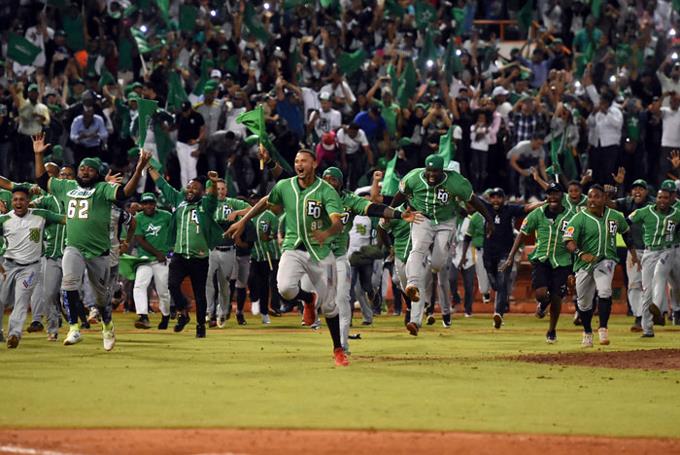 The jubilation was great in the last tournament for the Eastern Stars and here is the sample of how the players threw themselves to the ground as soon as the last out was made with a foul for the initial grounds. GLAUCO MOQUETE / DAILY LIST

For the first time in more than fifty years, the winter baseball tournament will open this Saturday without the Eastern Stars in the group of challengers who seek to dethrone the current holder of the crown.

This represents one of the novelties that will be exhibited in the 66th edition of the winter baseball championship, which at its traditional start amid the Major League playoffs, adds an impasse in the country, following the results of the elementary primaries held on past day six.

With three games, the Licey receiving the Chosen in the Quisqueya Juan Marichal, from 5:00 in the afternoon, the Eagles traveling to San Francisco de Macorís to collide with the Giants at 7:00 pm and the Bulls visiting the Stars in the Tetelo Vargas at 7:30 pm will mark the new baseball contest, in which, as always, close-fought battles are expected from beginning to end.

In the capital, Ubaldo Jiménez returns to winter baseball as soon as this Saturday. Jiménez has not played in the Regular Series since 2011-12 and will go up to the box for the Licey with Frankie Montás as a rival, a fact that represents a significant “banquet” starting the campaign with two major league teams.

In Julian Javier, Rogelio Armenteros is chosen by the Giants, while the Eagles will send Richelson Peña. The eternal veteran Evan MacLane, in his campaign 12 in the League, the last 11 with the Stars, will go up to the box by the current monarchs. Raúl Valdés, another pitcher with emblematic status, will throw the first clash for the Bulls.

After the crown won in the last tournament, the Orientals are no longer the team with the most time without victory, as has happened in each prior opening. Right now, that distinction belongs to the Bulls, who won for the last time in 2010-11, precisely against the pachyderms themselves.

With this crown of elephants, now five different franchises have won in the past five years, a fact that has never happened in the history of tournaments.

This will be a championship, in which Fernando Tatis saves the honor among Dominican leaders, while Pedro López (Puerto Rican, Licey), Lino Rivera (Puerto Rican, Toros), Jayce Tingler (United States, Chosen), Omar López (Venezuela, Aguilas) and Luis Dorante (Venezuela, Gigantes) will be the others, who will go in search of the scepter.

Long-standing players with a team like Anderson Hernández, Yamaico Navarro, both former high school students, will wear this year the Stars and Bulls uniforms.

This year the tournament will take a dedication to the late engineer Carlos Morales Troncoso, former vice president of the republic, and who in life was a great contributor to winter baseball, mainly from the Eastern Bulls. The contest will  feature native referees

Mr. Vitelio Mejía told Listín Diario that a very competitive championship will be held again, since the six franchises have worked tirelessly to make it happen, hiring imported goods and having a great native staff.