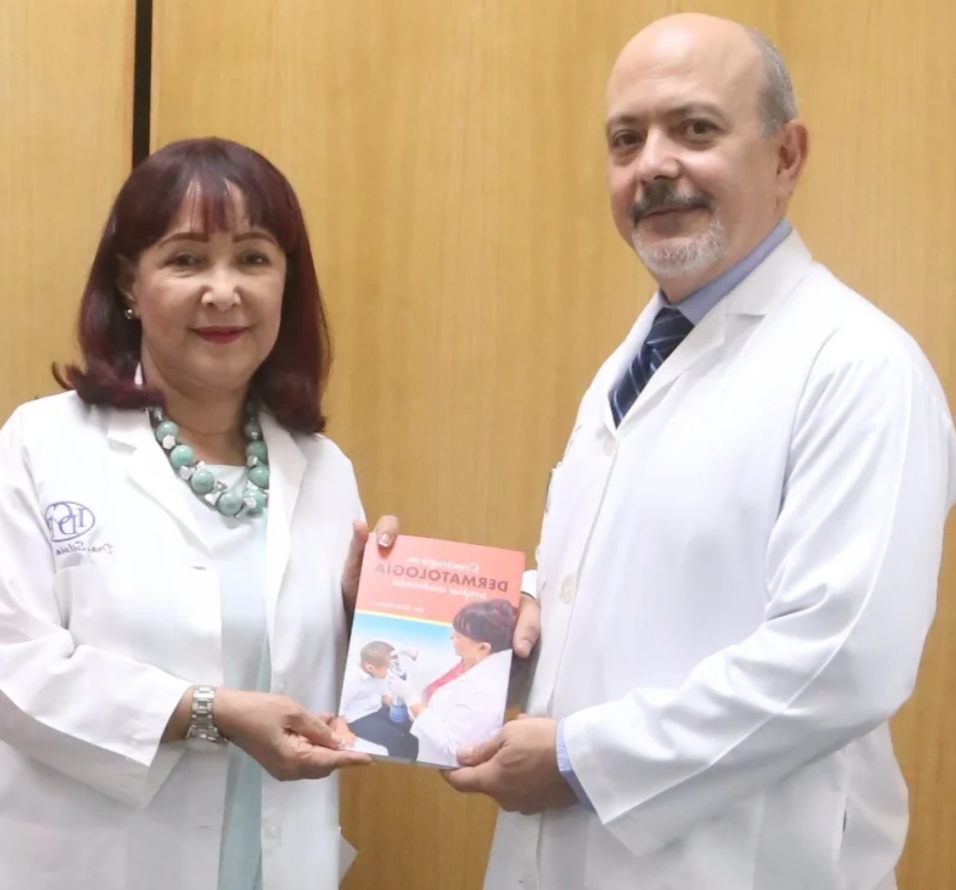 Dr. Silvia Marte gives the first copy of her book to Dr. Víctor Pou Soares, general director of the IDCP

Alopecia areata, hemangioma, vulgar warts, and solar keratosis ranked first in the diseases diagnosed and treated in children and adults, according to statistics from the Department of Pediatric Dermatology and Cryosurgery of the Dominican Dermatological Institute and Skin Surgery Dr. Huberto Bogaert Díaz (IDCP).

Dermatologist and pediatrician Silvia Marte, in charge of that area, said that last year the institution received 7,405 patients, of which 1,721 were alopecia areata, which meant 23.24%.

She argued that this evil was followed by vulgar warts in the second place with 1,112 cases for 15.02%, specifically detected in children and older adults, and 768 patients were received from solar keratosis for 10.73% that affected older people.

Dr. Marte explained that alopecia areata is a disease that causes hair to fall out, most people lose their hair in small, round strands.

On solar keratosis, she explained that it is a thick and scaly patch on the skin, which develops after many years of sun exposure, and only affects adults. Dr. Marte gave the first copy to Dr. Víctor Pou Soares, general director of the IDCP, who stressed that this new contribution will greatly enhance the education of doctors in training.

She described vulgar warts as small bumps on the skin that normally do not cause pain however, some itch and can hurt, especially if they are on the feet.

The hemangioma that occupied the fourth place, 498 patients diagnosed and treated, for 6.7%, attended the center, is not a non-cancerous (benign) tumor caused by the abnormal growth of blood vessels and can appear anywhere in the body, but they are found more frequently in the head and neck.

Last and not least was the diagnosis and treatment of 96 cases of carcinomas in the elderly, representing 1.25% registered cases, and the remaining 43% of the cases were from other pathologies that were diagnosed in a very low proportion.

Dr. Marte gave details of the disease by putting her book “Cryosurgery in Dermatology Combined Therapies” into circulation at its 19th Congress “Dermatological” Your skin is our business,” held at the Convention Center, Hard Rock, this weekend in Punta Cana, to which specialist medical appointments were given where the different causes of diseases that attack the skin were discussed.