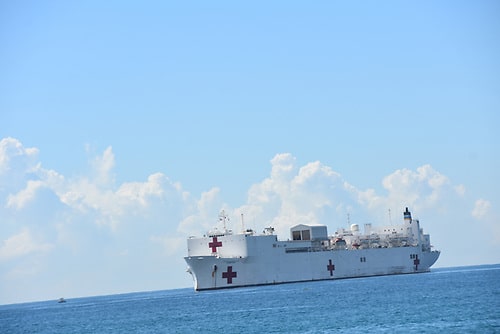 SANTO DOMINGO, Dominican Republic.- Last Monday, October 21, the USNS Comfort military hospital ship concluded its mission in Santo Domingo, as part of the military civic assistance program “Lasting Promise 2019” organized by the Southern Command and the Navy United States, the Ministry of Defense of the Dominican Republic, in coordination with the Ministry of Public Health and the National Health Service (SNS).

During the ship’s six-day visit to the country, more than 6,107 people were treated free of charge in medical consultations in the Olympic Center and in the Parque del Este, where more than five hundred patients were treated per day in each place. Also, 112 surgeries were carried out on-board the hospital ship in different specialties: ophthalmology, orthopedics, urology, maxillofacial surgery, reconstructive plastic surgery, and general surgery.

More than three hundred and twenty doctors, nurses, and health professionals of the ship, together with Dominican doctors, provided attention in the areas of general medical evaluations, preventive medicine, dental exams and dental treatments, optometry, pediatrics, dermatology, and physical therapy.

Lasting Promise highlights the sustained work of the United States Government to increase regional cooperation with partner countries on issues of humanitarian assistance, disaster preparedness, and mitigation. At the closing ceremony of the Comfort, Ambassador Bernstein said she was “delighted and proud to conclude our mission successfully, which helps us improve teamwork, strengthen our brotherhood, and highlight that we are united in our efforts to service of preserving human lives.”

Likewise, the USNS Comfort crew organized several activities to support surrounding communities with reforestation activities, beach cleaning, health and nutrition talks for pregnant women, preventive medicine, rational water use, youth leadership, donations of school supplies, and exchanges sports in the softball and soccer disciplines. At the San Martín de Porres School in the Guachupita sector, they painted and conditioned classrooms in addition to the basketball court, where they played with the students; while the National School of Vocational Training of the Armed Forces gave talks on prevention of vector-borne diseases (mosquitoes) and health protocols during natural disasters.

On the other hand, the classic rock band of the USNS Comfort “The Navigators” had several presentations in the two medical places and the Dominican American Cultural Institute, as well as exchanges with students of the National Conservatory of Music.

It is worth noting the participation of non-profit organizations and institutions that collaborated with the Comfort visit. These were Spirit of America, Nick for Kicks, Samaritan Feet, CitiHope, Human Group, Sanar Una Nación, Pediatric Foundation for Tomorrow, the UNPHU Veterinary School, and the Autonomous University of Santo Domingo (UASD).