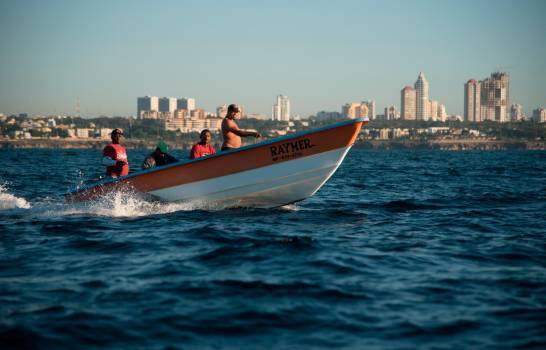 This Dominican documentary has come a long way around the world. (PHOTO: EXTERNAL SOURCE)

After its tour of important environmental festivals, the documentary Cacú: a change for life arrives at the halls of the Agora Mall Cinema Palace. A film work environmental court written and directed by Marvin del Cid, with support of Diario Libre in the production.

Its content tells the story of five fishermen from Manresa, a marginal neighborhood west of the National District of Santo Domingo, and their process of converting sea turtle nest predators to conservationists of these species.

The documentary recently found inclusion in the catalog of Pragda, a Spanish film distributor for the United States and Canada.

The public interested in watching the documentary can do so free of charge in rooms number 3 of the Agora Mall Cinema Palace on Friday 25, Saturday 26, and Sunday, October 27, at 5:00 pm.

For four years, Del Cid was documenting this process, under the leadership and accompaniment of marine biologist Omar Shamir Reynoso, who implemented a unique plan in the Dominican Republic, which includes involving fishermen and the community in conservation activities.

“From Ágora Mall, we have assumed the commitment to contribute to the dissemination of this documentary because it constitutes a true testimony of how, through awareness and education, we can transform the reality of our communities and prevent them from continuing to abuse our natural resources. Educating for sustainability represents a fundamental axis in the daily work of the operations of our shopping center involving our employees, tenants, and visitors,” said Silvia Rosales, administrator of Ágora Mall during the premiere of the documentary.

“In Palacio del Cine, we are honored to participate in this initiative and, therefore, we offer our facilities to serve as a window for the screening of the documentary, as a visible example of our support for environmental cinema and also for Dominican cinema,” says Javier Bolívar, director of Operations of the cinematographic company.

In just over an hour, the film presents different environmental and social problems that lead the viewer to learn about the biology of sea turtles that nest on the island, until they enter the poverty and needs of a vulnerable neighborhood of Greater Santo Domingo.

The documentary relates the story of Cacú, a turtle of the Tinglar or Lute species, the largest of all species with a length of about two meters and weighing more than 600 kilos. On May 29, 2014, in the middle of a rainy night, a large female approached the sand, which at the time was surrounded by rubbish and debris.

She approaches the shore with her huge fins, making a hole in the sand begins to lay her eggs. The spawning time ends, and this huge Tinglar turtle that measures one meter 75 centimeters (5’8″) is marked for the first time and baptized with the name of Cacú. Two months later, their young hatch on the beach in the same neighborhood.

The entire script of the documentary addresses Manresa as the place of sanctuary of these enormous marine species and the process of education and sensitization of their fishermen to turn them into the new protectors of the turtles in the Dominican Republic.

The documentary, written and directed by Marvin del Cid, features music by David Vásquez and also has musical themes by Vakeró, Eddy Núnez, Toto la Momposina, and the narration of Freddy Geneva.

About the creator of Cacú:

Marvin del Cid is Guatemalan with studies in Communication Sciences and extensive experience in the visual and multimedia field. He has worked for several media outlets in Guatemala and the Dominican Republic.

He currently works as a multimedia editor and photojournalist at Grupo Diario Libre, in the Dominican Republic. He was also a postproduction director, virtual set designer. He has exhibited his photographic work ten times, five solo exhibits, and six collectives.

For more than 15 years, he has dedicated himself to photography. He is a founding partner of www.guate360.com (winner of an Arroba de Oro in 2005) and www.dominicana360.com (Finalist Arroba de Oro USA, 2006), dedicated pages to the tourist promotion with extensive photo galleries, 360-degree images, cubic images, multimedia, and blogs.

His images, both in photos and videos, have been published around the world in National Geographic, Huffington Post, Sesame Street Australia, United Nations, Microsoft, among others. He participated with images in the documentary film, Death by a Thousand Cuts.