Leonel says he has no impediment to assume presidential candidacy 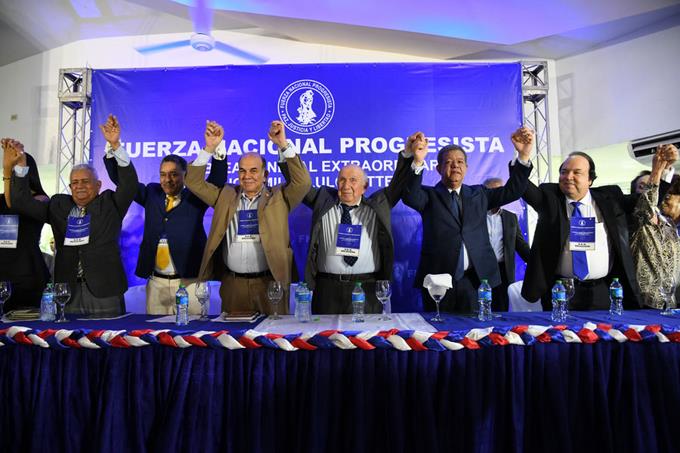 Former President Leonel Fernández said he has no impediment to stand as a presidential candidate in the 2020 elections.

The leader of the so-called “People’s Force” considered that what the electoral law establishes when a candidate who has lost an internal process, or can not present himself by another party does not apply to him.

“I can run, I can legally run, the law does not apply in my case, and in the remote and hypothetical case that it is applied it is unconstitutional,” said the ex-president as he was proclaimed a presidential candidate by the Progressive National Force ( FNP).

He argued that he is being proclaimed by a coalition of parties, which the law allows, as is happening with other candidates at the legislative and municipal levels.

In thanking the support, Fernández reiterated his rejection of any constitutional reform which has as its sole purpose the re-election of a presidential candidate.

During his speech Fernández announced the reasons for his separation from the Dominican Liberation Party (PLD), claiming a strong difference in values ​​and principles.

“We have certainly experienced a rupture that should not have occurred within the Dominican Liberation Party, but it is not a rupture caused by personal differences, but by a difference of values ​​and principles,” said the ex-president.

He explained that during their return to the government in 2004 they managed to gain control of the Executive Power and two years later they obtained a majority within the Senate and the Chamber of Deputies.

“During 2006 it meant the reunion of democracy for the Dominican Republic, where Boschism was consolidated, the expression of the dominant political thought in the country, a moment that we took advantage of to start the national democratic revolution,” he said.

As for the constitutional reform, he explained that his tenure in power was due to the wishes of the people, where all national institutions were consulted civically to make a decision about reelection, which was in his opinion positive and accepted by the Dominicans

The FNP proclaimed former president Fernández as its presidential candidate for the 2020 elections at its Extraordinary General Assembly.

With the BIS
The resigning president of the PLD proposed the creation of a great national alliance to confront and overcome any possibility of fraud and violations of the popular will in the upcoming electoral events.

Fernández touched on this issue during his speech in the act of proclaiming his candidacy for the presidency of the Republic by the Social Democratic Institutional Block (BIS).

On the occasion, the ex-president recalled that “power has tried to ignore the popular will,” in reference to the recent case that occurred in the primary elections of the PLD, which he said originated a fraud that adulterated the automated voting system to change the result that indicated a victory for him.

The BIS became the first political organization that proclaims Fernández as its presidential candidate.

Through the so-called Together Together coalition, the BIS will lead Leonel and its own candidates in alliances with other organizations at the legislative and municipal levels.

Leonel said that the Dominican people have witnessed how they backed off with the first automated electoral fraud in the Dominican Republic.

Highlighting the role of José Francisco Peña Gómez in Dominican democracy, Fernández recalled that he was one of the greatest popular and charismatic leaders the country has had, playing a transcendental role in the modern democracy, highlighting the historical role he played in 1978.

“It has been 40 years and we have not had any interruption in the constitutional order, where elections are held normally every four years, as the only legitimate form of democratic access to power,” said the ex-president.

The motion was presented by José Francisco Peña Guaba, president of the BIS, being approved by 345 of the 440 members that make up the National Executive Committee of that organization.

The opposition entity also announced the Great Renewal Alliance -WIN- that will be integrated by the PUN, FNP, PQDC, the PRSC, and the so-called People’s Force. The event was supervised by delegates of the Central Electoral Board.

PQDC
At the second Convention of Leaders of the Quisqueyano Christian Democratic Party (PQDC), support was expressed for Fernández and his People’s Force.

The Convention approved that more candidates run in the elections of 2020, in addition to the proposal of a green pact that fosters a healthier environment for new and future generations.

It was also unanimously approved that Vinicio Castillo Semán be presented as a candidate for senator of the National District by that coalition.