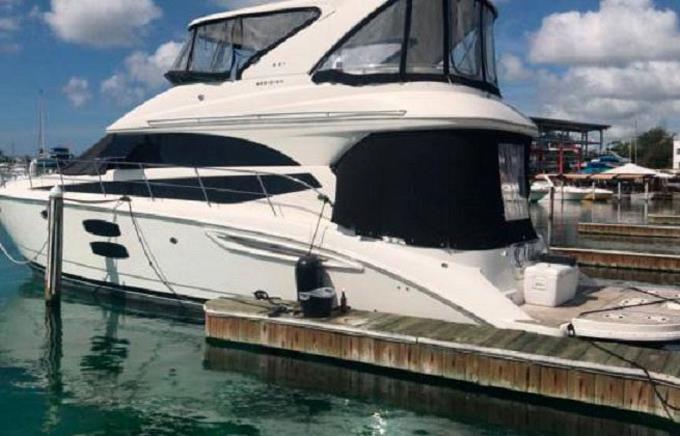 The Public Ministry and the National Directorate of Drug Control (DNCD) seized yesterday the luxury tourist yacht Milan, owned by capo César Emilio Peralta (César El Abusador), after a judge issued the order. The ship was in Boca Chica and was towed to the port of San Soucí, because it had damaged engines.

The craft was in Boca Chica and was towed to the port of San Soucí because it had damaged engines.

The spokeswoman for the Attorney General’s Office, Julieta Tejeda, explained that the Yacht was under the custody of the Public Ministry (MP), waiting for a judge to issue the seizure order.

“The MP had hijacked the yacht during the process of investigating the real estate of César, but yesterday the seizure was executed after the judge issued the order,” he said.

César El Abusador has been a fugitive from Dominican justice for more than two months, and according to the Attorney General’s Office, headed a drug trafficking network discovered after an operation carried out by the authorities.

The United States included El Abusador in its blacklist of drug traffickers, and there he is known as the “King of Cocaine.”

So far, the Public Ministry has confiscated more than 20 properties and more than ten vehicles of the alleged capo César el Abusador, according to the investigation reports.

Yesterday the DNCD also seized 945 packages of cocaine in a container in the Multimodal Port Caucedo.

The information was released by the institution’s spokeswoman, Josefina Capellán, who explained that the drugs were seized after intelligence work, in a container that had been mobilized outside her area.

The DNCD operation had the collaboration of DP World Caucedo, under the coordination of the Deputy Attorney General of the Judicial District of the Santo Domingo Province.

Capellán explained that the cocaine would have been transferred to Rotterdam, a famous port city in the Dutch province of South Holland.

Packaging
“The packages were distributed in 32 boxes, in 157 cases of six packages. The substances used were duly packed in cases for evidence and brought to the headquarters of this DNCD, in the custody of members of the operations sub-department, where it was delivered to the chain of custody department of this institution,” explained Capellán.

She explained that the substance would be sent to the National Institute of Forensic Sciences (Inacif) to determine weight, quality, and type. It then will be transferred to the warehouses of the Attorney General’s Office.

Investigation
Some of the drug packages had the virgin Guadalupe painted in their envelope, others a yellow star, or the word YESS, among other details.

Lock
In other operations that the DNCD has conducted in ports, they found the drug, because the lock had been changed to the container, and although it was a similar lock, the series gave it away.