Leonel remains obsessed in the quest for power 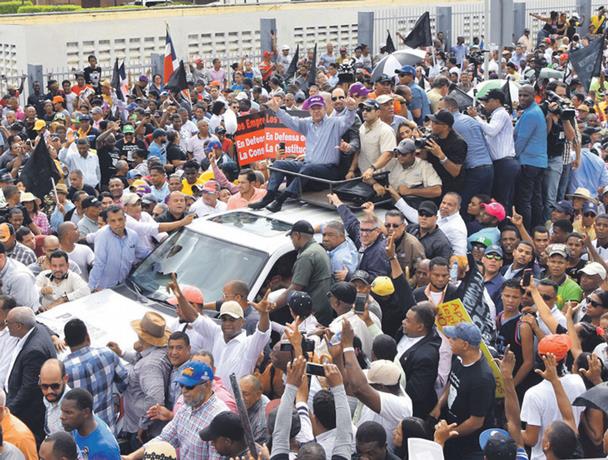 The belligerent budget of Former President Leonel Fernández is such that neither the Central Electoral Board (JCE), nor the Supreme Electoral Tribunal (TSE), can invalidate the proposal of his candidacy for the 2020 elections by his new party and others of the cause.

Fernández is running for these elections for the new party he founded when he resigned from the Dominican Liberation Party, called Force of the People, which acquired the franchise of the Dominican Workers Party, PTD, and imposed his leadership.

According to legal analysts such as Dr. Julio Cury, who has handled the issue with enough insistence, Dr. Fernández cannot be nominated by any party or political group because he already was in the past elementary that he lost, according to the JCE.

Dr. Fernández falls within the range of what the law says regarding his possible nomination and other politicians equally nominated by the PLD who lost in the last primary elections, including Lucia Medina, president’s sister, who was a candidate for the Senate of San Juan de la Maguana.

The position of the PLD, of which President Temístocles Montás is now president, is that the opposition of that party to Dr. Fernández’ nomination for 2020 is because he competed and lost. He recalled that when discussing the law in the legislative chambers, it was in mind to put an end to “crossing the floor:” changing to a second party after being elected as a member of a first-party or voting against the approved party lines.

After making a series of discourses on the scope of Law 33-18, Cury argues that the solution would be for the case to be declared urgent and failed as soon as possible to define the electoral landscape before the expiration of the deadlines for the registration of nominations proposals in the JCE.

The former president Fernández is fighting his case before the public opinion as he did when he opposed the constitutional amendment that would have allowed the postulation of President Medina, and then before the statement that he could not run in 2020 for any party or group.

During the expected presentation in the legislative chambers of the modification project, the former governor summoned a mob of supporters to the place. After the elections that the JCE says he did not win against Gonzalo Castillo, of the PLD, he did the same before the agency’s premises electoral.

The former president’s sector is fighting his case as he can. Vice President Rafael Alburquerque has said that ignoring Fernandez’s ability to run would create a political crisis. Fernández alleges that preventing him from running an application violates his constitutional rights.

Disruptions that occurred in front of the National Congress building and the JCE premises had the bad luck of harming the economy since the dollar rate rose a few points as expected. It was a strange way for the candidates to win the 2020 elections: to see in advance the grim picture they would face.

As if nothing had happened in the last elections that primaries were held, Dr. Fernández said on Thursday that “that is a debate that does not make much sense because I am protected by the Constitution that establishes the principle of choosing and being elected.”

However, the new member of the Political Committee of the PLD, José Ramón Peralta, said his party would win the upcoming May elections.

“The PLD will win the elections. It is the leading party in the country, and we are not afraid of anything. We only fear God and the decision of the Dominican people.”

The Central Bank has reacted on at least two occasions by placing hard currency volumes on the market for the performance of the trade, at a time characterized by replenishment of inventories and travel schedules of many Dominicans abroad.

In the keynote address delivered by the governor of the Central Bank, Héctor Valdez Albizu, on the occasion of the LXXII anniversary of the institution, the official warned about the adverse international environment and internal moderation during the first months of the year.

For that reason, the Monetary Board reduced the monetary policy rate by 100 basis points (from 5.50 in May to 4.50 at present), while unconventional financial easing measures were approved, particularly the release of legal reserve resources by more than RD $ 34 billion, designated to the productive sectors.

Valdez Albizu recalled that “in September the real economic activity registered an interannual growth of 5.1%, after having reached 4.8 in August.

In this way, during the first nine months of the year, the gross domestic product registered an interannual growth of 4.8%, the highest in Latin America and the Caribbean.”

On the social inequality usually cited as a failure of the Medina regime, Governor Valdez Albizu not only noted its decrease but also observed by the Economic Commission for Latin America (ECLAC), in the sense that the DR is among the Four less unequal countries.

The obsessive struggle of former President Fernández in returning to power occurs during a time of turbulent situations in regional countries such as Haiti and Chile—where the crowds ask for the resignations of their presidents. There are also Honduras and Panama, whose citizens demand claims for their workers and decry the failure of pension funds.

Perhaps warned that Dominican politicians could cause chaos in the economy and politics, the US State Department sent Undersecretary Cindy Kierscht to Santo Domingo this week.

Undersecretary Kierscht reviewed the situation of Haiti and Venezuela and the repercussions with President Medina and Chancellor Vargas Maldonado.