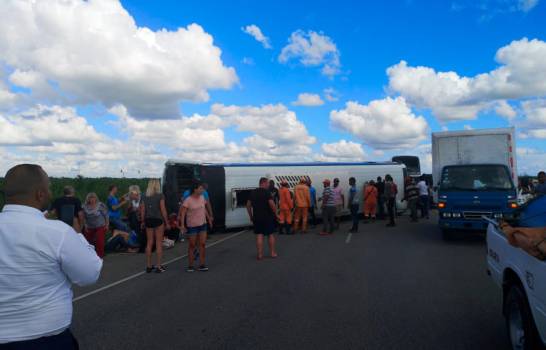 The Induveca food company and the Monumental transport company are dealing with the traffic accident that occurred on the Coral highway, where some 19 Russian tourists were seriously injured.

The transport company stated on Wednesday night that “the Induveca truck was traveling erratically from one lane to another. And when it settled in the right lane, our bus attempted to pass in the left lane, and when the bus passed, it received a blunt blow on the right rear tires,” says the note.

Regarding Monumental’s statement, Induveca considered the narration as “disconcerting and contradictory” and adds that the Induveca truck was “rammed in the back and after the impact, it landed in reeds near the Coral Highway between Higüey and La Romana.”

The accident “originated when the passenger bus owned by Monumental Transport, rammed our truck in the rear, which, after the impact, crashed into some reeds adjacent to the highway.” Induveca added that “the disconcerting version offered to the media by the company that owns the bus, is contradictory in itself, and does not sympathize with the facts indicated above, which are backed by existing material evidence and evidence.”

However, a witness, the publicist Eddy Núñez, claims to have been directly behind both vehicles when the accident occurred. Núñez argues that it was the uncontrolled speeding bus that hit the truck after losing control.