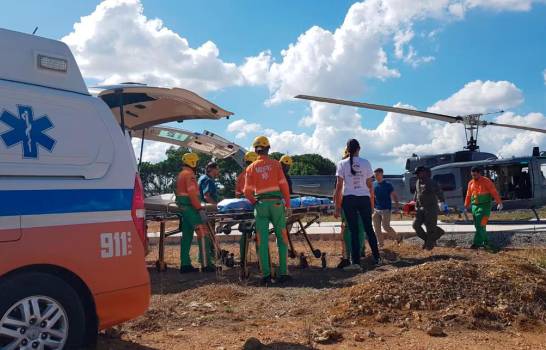 The publicist Eddy Núñez, an eyewitness to the accident registered on Tuesday on the Coral Highway, in which 19 Russian tourists became seriously injured, was also the first person to alert the authorities of emergency before the fact—has refuted the version of the Monumental transport company about the cause of the accident.

Núñez, who has also given his version of the events on social networks, told Diario Libre what he saw and ensures that the statements given by Monumental do not correspond to the reality of what occurred.

Before presenting his version of facts, the publicist explains he has no responsibility with either Monumental or Induveca, but with the truth and that his profession is a publicist and musician.

Here is a description of the events according to Núñez:

“We left for Santo Domingo at 3:01 in the afternoon. We had passed the toll. I was driving at a speed of about 110 to 120 kilometers (per hour). The road conditions were fine. I was traveling down the right lane. But Induveca’s truck was moving slower than me. When I went to pass the truck, coming from the right, at that moment, I looked in the rearview mirror and saw that the bus was driving much faster than me. So I slowed to let it pass. When the bus passed me, I got behind it to pass the truck,” Núñez said by telephone to Diario Libre.

Núñez remembers that when he was behind the bus, “I saw that in less than a second, the bus starts to swerve in an ‘S,’ I thought it would maintain control, but that did not happen. I started to slow down, and at that moment, the bus began to spin. It looked like it was on ice, it took about two spins and then hit the truck. The impact sent it off the highway. I don’t know what happened to the bus. I have read that part of it broke off or something. But the truck didn’t hit the bus.”

Núñez remembers that once the accident occurred, he stopped his vehicle in the green area of ​​the center of the Coral Highway, and the person who accompanied him decided to see how the people were on the bus, “and I went to those in the truck. When I spoke to the people in the truck, I saw that one of them had exited and asked what happened, the partner does not look very good; I tell him to leave him there; then when I walked to the bus. I started to see human body parts on the road. I couldn’t stand to look at the grizzly scene. I realize there were Russians on the bus because a passport flew out,” he says.

Núñez said that he and his passenger were in place after the emergency agencies arrived and remained there for 20 minutes.

The tourist transport company Monumental reported that the accident on the Punta Cana-La Romana motorway occurred because the bus with 39 tourists was impacted in the right rear tires while traveling in the left lane trying to pass a truck that was driving in the right lane.

“The truck was driving erratically from one lane to another, and when it settled in the right lane, our bus set out to pass on the left, and as it passed by, it received a blunt blow on the right rear tires,” says the company note.

The company explains it offers its description of facts after hearing the driver’s account, some of the passengers, and people who witnessed the events.

The company further stated it had not explained the accident because it understood that the priority was to concentrate efforts, all material, and human resources to assist transported tourists and ensure that they received the necessary medical attention from specialist doctors.

For this, Monumental states, even a helicopter was used that transported the truck driver to Santo Domingo in serious condition.

Monumental points out that it is necessary to clarify circulating versions, that the bus driver, Santos Beltré, is an employee with an unquestionable service sheet. Santos Beltré has participated in all the training La Monumental offers continuously to its drivers and has passed with negative results in the anti-doping tests (marijuana, cocaine, opium, ecstasy, and amphetamines) performed in December 2018, April and September 2019.

The driver also passed the tests administered the day of the crash: November 27.