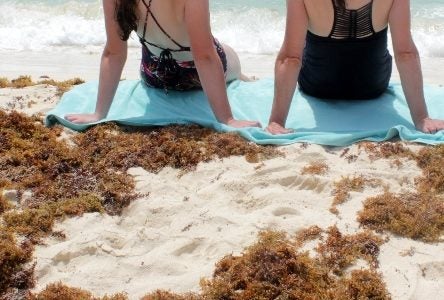 The Caribbean Sea, a natural treasure that according to the World Bank serves as a livelihood for more than a hundred million people, now faces a definitive crossroads, fueled by pollution, the effects of the climate crisis and diseases, in addition to plagues of the sargassum seaweed.

Dr. Briggita Van Tussenbroek, a researcher at the Institute of Marine Sciences and Limnology of the National Autonomous University of Mexico (UNAM), tells Efe that pollution is the main current problem of these waters, which bathe the coast of sixteen countries, according to the Economic Commission for Latin America and the Caribbean (ECLAC).

The Caribbean, explains Van Tussenbroek, is a region low in nutrients and its ecosystems, in consonance, are accustomed to living thanks to a very efficient saving, so it is very harmful that “coastal developments in the region, including tourism, are pouring liquids with many nutrients into the region.” These discharges – sewage effluents, agricultural wastewater, oil, and other chemicals – pose a threat to organisms such as corals and, on the contrary, function as a source of food for more aggressive species, such as algae, capable of using them more quickly. There is also the problem of plastic.

So everything is being thrown out of delicate balance by these environmental contaminants.