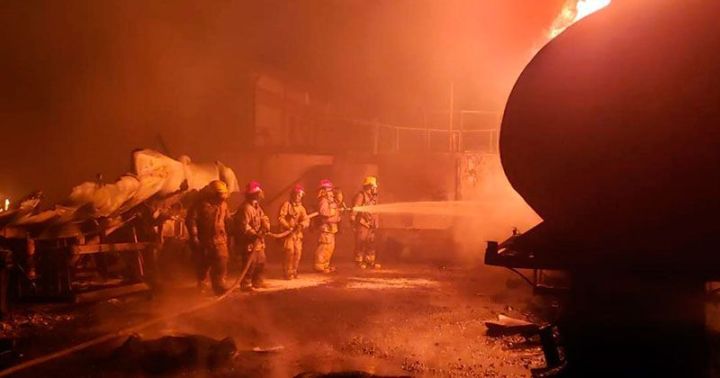 SANTO DOMINGO. – The National Emergency Assistance and Security System 9-1-1 confirmed this Saturday that four people were injured and two of them merited being transferred to the Dr. Ney Arias Lora Traumatology Hospital, in the fire that affected a fuels storage company, in Villa Aura, Santo Domingo West.

In a press release, it indicates that the response units remained in action until 2:15 am on Saturday, while four units of the Fire Department remained in place until they managed to quell the fire at 6:30 am today.

The official agency indicates that the emergency was attended by 9 units of the Fire Department, 3 Civil Defense rescue units with 37 men; the rescue unit of the National Army collaborated with 25 members; The Emergency Operations Center (COE), the Ministry of Public Health, The Ministry of Public Works and Communications (MOPC) also joined the team; In addition, members of the National Police and the General Directorate of Traffic Safety and Land Transportation (DIGESETT) provided service.

Stresses that “the coordinated response had four objectives: combat, evacuation, security perimeter and that there was no lack of support logistics, managing to quell the fire with water and foam.”

The 9-1-1 said that Civil Defense rescuers evacuated residents close to the event site in order to safeguard their lives, returning to their homes around midnight, once the fire was controlled and the area secured.

After 6:00 pm on Friday, several explosions and subsequent fire were recorded in the fuel depots of the Petro Fuel company located in the Seventh Street of Villa Aura, next to Los Beisbolistas Avenue.