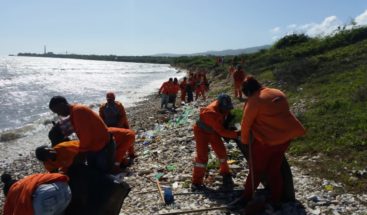 BARAHONA.- The Ministry of Public Works and Communications (MOPC) reported that they intervened urgently in Neiba Bay in Barahona after the threat that the landfill was less than 10 meters (30 feet) from the waters.

MOPC Road Maintenance Program Brigades were sent for the removal of solid waste, debris that affects the environment and to recover the splendor of the area.

The emergency intervention was arranged after a publication made by a newspaper of national circulation, which on Monday reported that the garbage is less than 10 meters from the crystalline waters of the Bay.

With wheelbarrows, rakes, spikes, and shovels the brigades facilitated the collection of plastics, wood and other non-compatible materials that were removed by trucks of the MOPC.

Before the alert of the threat, about 275 men were sent by the disposition of the Minister of Public Works, Ramón Pepin and that the brigades will remain until the area is completely clean.

Five brigades with 55 men are the personnel cleaning and clearing the affected area in which 10 tons have been removed with 2 Road Maintenance trucks.

The director of the Military and Police Commission, Lieutenant Colonel Douglas Borrell said they will carry out an extended cleaning day, so that in the shortest possible time the bay is completely clean.

Improvised landfills have been removed, and solid wastes removed, sidewalk and container cleaning, weed clearing, tree pruning, among others.

The tons of solid waste have been collected by the staff of the MOPC Road Maintenance Directorate.

The workers joined the work from 8:00 in the morning until 5:00 in the afternoon in the area operated by the MOPC.